An estimated one million faithful turn out for Pope Francis mass in Madagascar | Eurasia Diary - ednews.net

Pentagon says about 14 Russian-made warplanes could be on Libya’s territory
Read: 1052 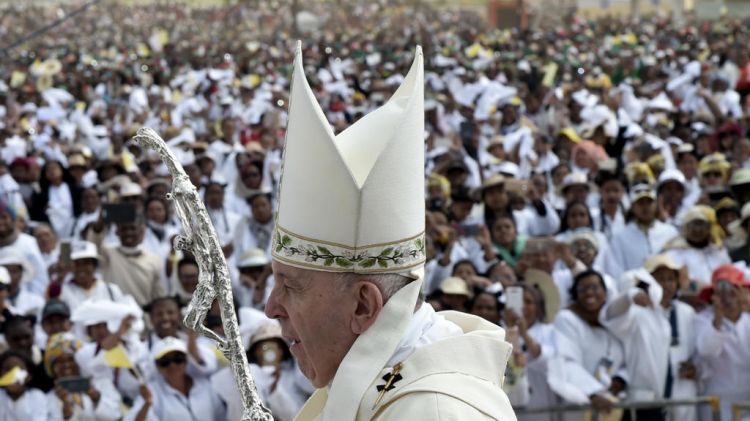 An estimated one million people gathered at Madagascar's Soamandrakizay stadium in the capital on Sunday to hear Pope Francis say mass on the second leg of his three-nation African tour, AFP reports.

The massive crowd had waited patiently, stretching into the distance from the early hours, to see the pope, the first pontiff to visit in 30 years.

"Organisers estimate there are around one million people," a Vatican spokesman said.

Organisers had said earlier they expected around one million attendees. Some described it as the biggest public gathering in Madagascar's history.

Many people wore pope-emblazoned white and yellow caps -- the colours of the Vatican, and they cheered as the pope-mobile made its way through wind-swept clouds of red dust picked up from the stadium floor.

During the homily, the Argentine pontiff urged them "to build history in fraternity and solidarity" and "in complete respect for the earth and its gifts, as opposed to any form of exploitation".

He spoke out against "practices that lead to the culture of privilege and exclusion" and criticised those who consider family "the decisive criterion for what we consider right and good".

"How hard it is to follow him (Jesus) if we seek to identify the kingdom of heaven with our personal agenda or... abuse the name of God or of religion to justify acts of violence, segregation and even murder".

After mass the pontiff will visit Akamasoa, a city founded by Argentian priest Father Pedro, who has lifted thousands of Malagasy waste-pickers out of poverty.