The loss of the four young men is extremely sad and we share grief of their families – British journalist
Read: 2093 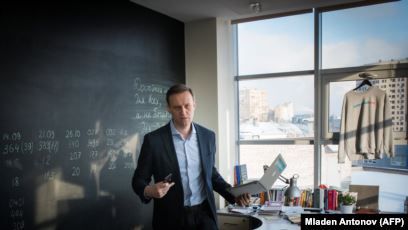 Russia's Justice Ministry has classified a nonprofit anti-corruption organization run by Alexei Navalny as a "foreign agent," a move critics say is the government's latest attempt to silence the popular opposition leader.

In a brief statement on Wednesday, the Justice Ministry said it classified Navalny's Anti-Corruption Fund as a foreign agent under a 2012 federal law preventing non-profit organizations from receiving international funds, a claim that the organization denies.

Navalny said that his organization has not received a "dime" of foreign investment.

"All FBK money is your donations (to citizens of the Russian Federation)," he said in a tweet. "The actions of the Ministry of Justice are absolutely illegal and, obviously, by direct order of Putin."

The ministry said the organization received $2,100 from a Florida company that sells doors and a Spanish citizen.

"We demand that the Justice Ministry publicly explain to everyone, and provide evidence that the FBK has received at least one penny of foreign money," Navalny said in a second tweet.

Amnesty International said the Kremlin has used this law to silence other critics and is often wielded as a warning that the Russian government "will not tolerate anything that can effectively galvanize critical public opinion and protest," said Natalia Zviagina, Amnesty International Russia's director.

"We once again call on the Russian authorities to repeal the 'foreign agents law' and stop its ongoing assault on the right to freedom of association in Russia and its crusade against civil society activists and government critics," Zviagina said in a statement.

The charge of being a foreign agent is just the most recent attack that Navalny and his supporters have faced from the government since early summer when protests broke out in Moscow over Putin's decision to bar opposition politicians from running for election in the 45-seat Moscow City Duma Parliament.

Over the summer Navalny has been arrested and jailed for 30 days for encouraging the public to join an unsanctioned demonstration. And last month, Russian police raided his regional offices and homes of his staff and supporters connected to a $1.2 million money-laundering case against the Anti-Corruption Fund.

Navalny has said those charges are also politically motivated.

"This decision is the same pressure on us and an attempt to stop our activities, as is the case of the alleged 'money laundering,'" Yarmysh said.