The loss of the four young men is extremely sad and we share grief of their families – British journalist
Read: 2190 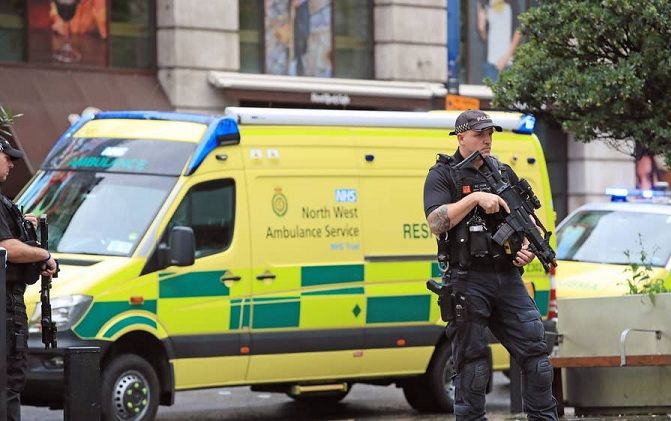 Counter-terrorism police are leading an investigation into a series of stabbings at the Arndale shopping centre, Greater Manchester police have said.

Five people were stabbed and taken to hospital in the attacks on Friday morning, according to North West Ambulance Service. GMP said “multiple people” had been injured in the incident, and that a man in his 40s had been arrested on suspicion of serious assault and was being questioned.

In a statement, GMP said: “In these early stages we are keeping an open mind about the motivation of this terrible incident and the circumstances as we know them.

“Given the location of the incident and its nature, officers from Counter Terrorism Police North West are leading the investigation as we determine the circumstances.”

MI5, the domestic security service that leads on counterterrorism investigations, is also monitoring events in Manchester following the stabbings.

Video footage and photographs showed armed police officers deployed around the Exchange Square side of the shopping centre. One clip showed officers using a Taser and holding a man to the ground before arresting him.

In other clips and pictures posted on Twitter, a large number of emergency service vehicles were seen arriving at the centre.

It is unknown whether the attacks have resulted in any fatalities but an ambulance service spokeswoman said paramedics had treated four people.

Footage showed people being taken away on stretchers, and members of the public were asked to stay away from the shopping centre.

It is unknown whether any of the attacks have resulted in fatalities but a spokeswoman for North West Ambulance Service said paramedics had treated four people.

People were seen being taken away on stretchers and members of the public were asked to stay away from the centre.

The UK’s threat level is severe, meaning an attack is highly likely. In recent days, there have been suspected terrorist attacks in France and Germany, but other incidents in the UK suggest motives can be hard to determine in the immediate aftermath.

Placing the north-west counter-terrorism unit in charge of the investigation of the Manchester stabbings is a precaution at this stage. Rapid inquiries into the person in custody will determine whether it stays in the lead, or whether the incident passes back to regular police.