Bodies of migrants who died at sea located by Italian authorities 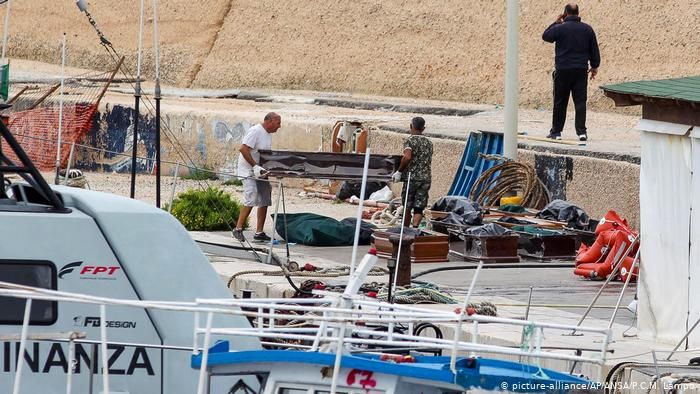 Italian authorities announced on Tuesday they have located the bodies of at least 12 people who drowned last week after a boat capsized in rough seas off the Italian island of Lampedusa.
In photos released by the Italian coast guard some of the bodies can be seen, with their clothes still on, floating at a depth of about 60 meters. Among them is a woman who drowned while embracing her child of about eight months.
On 8 October, Italian authorities rescued 22 survivors from the boat, which was carrying about 50 people. The bodies of 13 women were found at the time of the rescue, including that of a 12-year-old girl. But after the testimonies of the survivors, it was clear that dozens of people, including 8 children, were still missing.
According to an initial reconstruction of events, all the people onboard moved to one end of the vessel as the rescue boat arrived, causing it to overturn. According to survivors, the boat had initially left Libya carrying mostly people from sub-Saharan Africa before sailing along the coast to reach the city of Sfax in Tunisia where another 15 people boarded for the journey to Sicily.
The site of the wreck was finally located on Tuesday and the bodies will be recovered in the next few days.
“We believed in it until the end,” Agrigento’s prosecutor, Salvatore Vella, who is leading the investigation into the shipwreck and the search for the bodies, told the Guardian. “The divers did not give up for a single day. They put all their heart into returning the bodies of loved ones to their relatives.”
The news has shaken the country, particularly because of the high number of children onboard. The prosecutors have released some of the harrowing accounts of survivors.
Among these was that of a young Tunisian migrant, Wissen. When the boat sank, the man recovered the body of a child who had been onboard. But suddenly, he recounted, another migrantdesperately clung to his legs to try to save himself, risking dragging Wissen down with him. Wissen had to let go of the child to unfasten his trousers and the other migrant sank to the bottom. Wissen was saved but could no longer find the child.
Although the numbers of arrivals have practically halved, thousands of people continue to attempt the crossing from Libya to Europe.
Yesterday, the Italian coast guard rescued a boat with 180 people on board, while the Maltese authorities aided another boat with 75 migrants on board.
On Wednesday, the Norwegian-flagged Ocean Viking docked in Taranto, Puglia, with 176 migrants onboard. The vessel was operated by the French charities SOS Mediterranean and Médecins Sans Frontières (MSF), which had rescued the migrants at sea about 30 miles off the Libyan coast.
While in Brussels the member states of the European Union are working to back a temporary plan to quickly get migrants off the boats in the Mediterranean Sea and distribute them among willing countries, in Italy the case of a human trafficker who participated in a meeting with the Italian authorities has sparked criticism.
Abd al-Rahman Milad, known as Bija – described by the UN as one of the world’s most notorious human traffickers – took part in a meeting with Italian officials and a delegation from the Libyan coastguard at Cara di Mineo, in Catania, one of the biggest migrant reception centres in Europe, on 11 May 2017.
In February 2017, the then Italian interior minister, Marco Minniti, signed a memorandum with the leader of Libya’s UN-recognised government, Fayez al-Sarraj, introducing a new level of cooperation between the Libyan coastguard and Italy, including the provision of four patrol vessels.
Despite the Italian authorities denying their involvement in the meeting, the UN migration agency has confirmed it was requested by the Italian interior ministry.
Bija was reached by Italian newspaper Avvenire, who first reported the case. In the interview the trafficker said he was “offended by how the media have described him” and that he was “coming to that meeting only to discuss how to block the flow of migrants”.