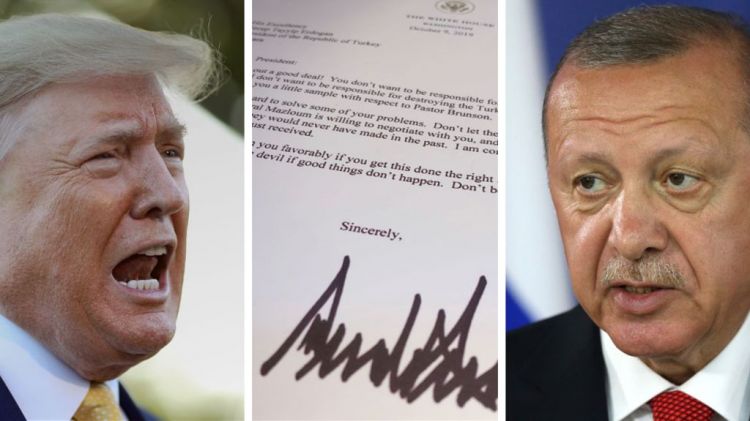 Turkish President Recep Tayyip Erdoğan said on Friday that his government did not see a leaked letter in which U.S. President Donald Trump threatened Turkey as a priority issue, but would do what was required about it in the future.
Erdoğan mentioned Trump’s letter during a press conference in Istanbul about a deal Turkey and United States struck on Thursday to temporarily pause the Turkish offensive in northern Syria.
“President Trump’s letter, which does not comply with political and diplomatic courtesy, appeared in the media on the day of this meeting,” Erdoğan said.
“Of course we have not forgotten about it. It is not right for us to forget it,” he said about Trump’s letter urging Erdoğan to make a good deal to end Turkish incursion into northern Syria.
“Don’t be a tough guy. Don’t be a fool,” Trump said in his letter urging Erdoğan not to launch a military operation in northeast Syria. CNN Türk reported that the Turkish president had thrown Trump’s letter in the bin before launching Operation Peace Spring on the same day.
“But our mutual love and respect also does not allow us to keep this continuously on the agenda,” Erdoğan said, referring to his relations with Trump.
“We also do not see this issue as our problem and priority today,” the Turkish president said. “But I want you to know that we will do what is required about this issue when the right time comes.”