Emperor Naruhito took over throne from his father on May 1, predecessor's 30-years-rule 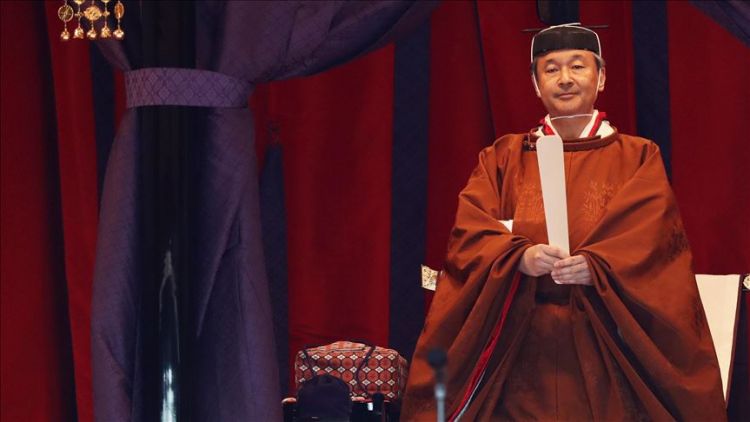 Japan’s new monarch was officially enthroned on Tuesday in an ancient-style ceremony.
Clad in nineth-century designed dark-orange robe, Emperor Naruhito, 59, stood inside the 6.5-meter-high canopied Takamikura imperial throne during the ceremony which was witnessed by nearly 2000 guests, including those from 190 countries, Kyodo News reported.
Naruhito took over the throne from his father on May 1.
"I pledge hereby that I shall act according to the Constitution and fulfill my responsibility as the symbol of the state and of the unity of the people of Japan," the 59-year-old emperor said.
His wife, Empress Masako, stood beside him in an identical throne.
“I always wish for the happiness of people and the peace of the world, turning my thoughts to people and standing by them,” Naruhito added.
Japanese Prime Minister Shinzo Abe led felicitations from the government side inside the Matsu-no-Ma state room at the Japanese Imperial Palace where the ceremony was held.
"We will make our utmost efforts to create a peaceful, bright future full of hope for Japan," said Abe, who was wearing a tailcoat and led the guests cheering for the longevity of the emperor.
Naruhito’s father and predecessor, Emperor Akihito, 85, had officially announced his abdication in April to end his 30-year reign.
Akihito is the first Japanese monarch to abdicate in 202 years in Japan’s imperial history.
He had ascended to the throne at the age of 55 when his father Emperor Hirohito died on Jan. 7, 1989.
To mark the ceremony, Japanese government pardoned more than half a million petty criminals.
The run-up to enthronement ceremony witnessed massive tornado hitting major parts of Japan killing dozens of people and destroying property worth millions of dollars.
Reports coming from Tokyo said that early morning rains forced the Imperial Palace to move the ceremony inside the palace.