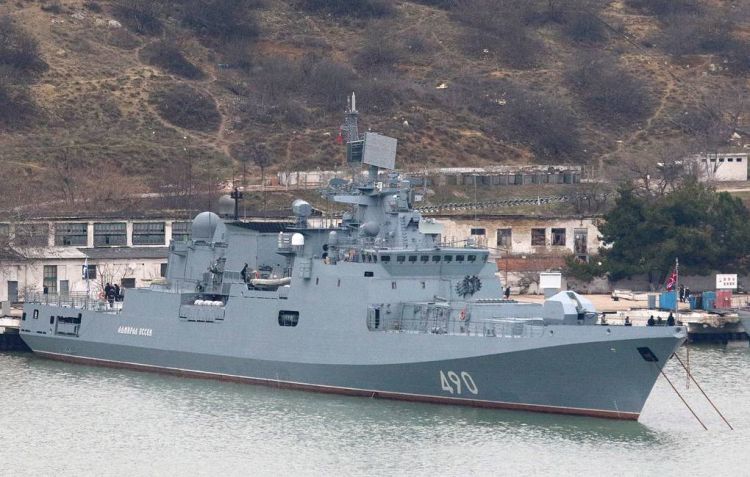 "In accordance with the combat training plan, the crew of the Black Sea Fleet frigate Admiral Essen is holding a series of shipborne drills with missile and artillery firings in the Black Sea. At the first stage of the drills involving a naval battle, the sailors conducted artillery fire against a sea target and practiced the algorithm of actions to strike a notional enemy’s surface ship by the Kalibr missile system with electronic launches," the press office said in a statement.

At the second stage of the drills, the crew repelled an attack by a notional enemy’s aircraft with artillery fire against air targets, the statement says.

The crew of two Su-24M attack aircraft from the Black Sea Fleet’s naval aviation and air defense forces simulated the enemy in the drills, the press office specified.

"The ship has deployed to the sea as part of the mandatory course of the crew’s training, which stipulates accomplishing assigned missions by a sole ship upon its deployment to the sea," the press office said.

The Admiral Essen represents a new series of Project 11356R/M frigates (the Project 11357 designation is also used). These frigates are designed to destroy enemy surface ships and vessels, submarines and ground installations, carry out patrols and defend sea lanes.

The frigates of this Project are armed with eight launchers of Kalibr-NK cruise missiles that are capable of striking surface, coastal and underwater targets at a distance of up to 2,600 km.

The warships of this Project are also armed with Shtil-1, Palash and AK-630M air defense missile and artillery systems, A-190 100mm universal artillery guns, torpedo tubes and RBU-6000 rocket launchers. The frigates also have a take-off and landing strip and a hangar for an anti-submarine warfare helicopter (Ka-27 or Ka-31).