daily news
Probe finds Israeli strikes in Gaza 'could be a war crime'
Collective security vital in Iran's regional policy doctrine
Azerbaijani, Saudi Arabian FMs discuss bilateral relations
About 650 troops to remain in Afghanistan after US completes pullout
16th round of Astana talks on Syria to be held July 7-8
Azerbaijan is strategic partner for Romania - FM
Armenian Armed Forces fire at positions of Azerbaijani Army
We cannot leave the South Caucasus to other actors - Austrian FM
﻿

The refusal of Kocharyan-Sargsyan blocs to recognize results of elections is tactical character - Expert
Read: 420

Friendship and brotherhood between Azerbaijan and Turkey nations are our greatest wealth - Parliament Speaker
Read: 268 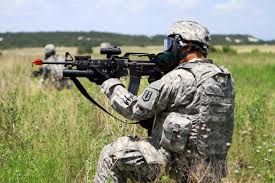 "The Shvabe Holding Company of Rostec State Corporation has exported a large batch of night vision monoculars in the interests of one of the countries on the African continent. The device is equipped with second-and third-generation electro-optic converters and also with infrared illumination," the press office said.

The Rostec press office declined to specify the amount of the batch and the sum of the deal, saying, however, that the African customer had received PN21K monoculars produced by the Novosibirsk Instrument-Making Factory (part of the Shvabe Holding Company). The device is distinguished by its compact size, can be equipped with various lenses and mounted on the head or the helmet.

"In 2020, another large contract will be implemented for the delivery of similar items," the press office quoted Rostec Executive Director Oleg Yevtushenko as saying.

Last year, the PN21K monocular was tested by visitors of the Night of Museums international event who watched the life of flora and fauna with its help at the Novosibirsk Zoo.