Russia trying to aid Trump in election - US Intelligence
Read: 405

Trump relents and dons a face mask in public 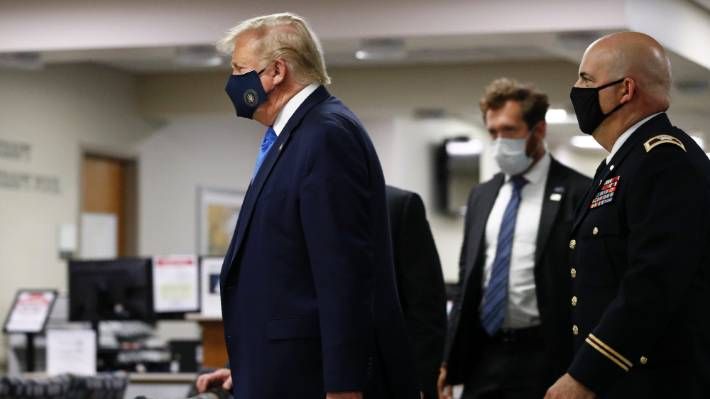 To say the president of the United States has never been a fan of the face mask is an understatement – in May he retweeted a Twitter post mocking Democratic presidential challenger Joe Biden for wearing a mask.

But with Covid-19 cases soaring in the US, President Donald Trump has relented – he chose to wear a face mask during a visit to the Walter Reed National Military Medical Center.

Trump was photographed walking with about a dozen officials in the halls of the hospital, wearing a navy-blue mask adorned with a gold presidential seal.

The president was expected to meet combat-wounded service members and their families, as well as health care workers who have been on the front lines of the Covid-19 pandemic.

The event was the first public photo opportunity in which Trump has appeared wearing a mask since the beginning of the outbreak. Trump spent about an hour at the hospital in Bethesda, Maryland.

An image of a masked Trump surfaced during his visit to a Ford Motor Co. factory in Michigan in May. The president didn't wear the mask during the public portion of the visit to the plant, which was making ventilators, masks and other medical supplies, saying he didn't "want to give the press the pleasure of seeing" him in the face covering.

Despite repeated calls to do so, including from members of his own party, Trump has stubbornly refused to wear a mask, defying official guidelines from the Centers for Disease Control and Prevention and behaviour modelled by members of the White House coronavirus task force, including Anthony Fauci and Deborah Birx.

Trump hinted in an interview with Fox News on Thursday that he was planning to wear a mask during his hospital visit. "I expect to be wearing a mask when I go into Walter Reed. You're in a hospital setting, I think it's a very appropriate thing," Trump told host Sean Hannity. "It's fine to wear a mask if it makes you feel comfortable."

Trump's remarks were in stark contrast with others he's made on face coverings during the pandemic. Surveys have shown mask wearing has become a topic of partisan debate.

Trump held a rally in June at an indoor arena in Tulsa, Oklahoma, where masks weren't required. An outdoor rally in New Hampshire on Saturday, where mask-wearing was to have been encouraged, was postponed due to a tropical storm in the vicinity.

With poll numbers falling and criticism of his handling of the pandemic rising, Trump appeared to warm to the idea of wearing a mask in recent weeks. He told Fox Business Network on July 1 that "I'm all for masks, I think masks are good" but added that "I don't know if you need mandatory”.