Peace, prosperity and stability in Azerbaijan is significant for the true realization of international projects and UN 2030 Agenda - Qaiser Nawab
Read: 931 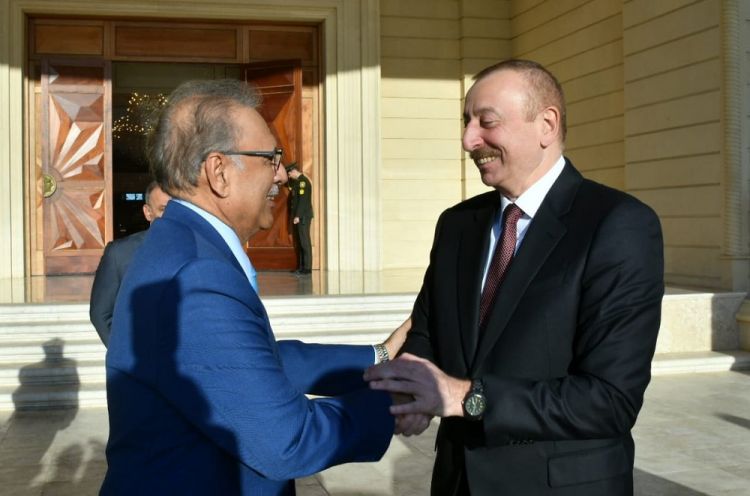 President of the Republic of Azerbaijan Ilham Aliyev in a letter to President of the Pakistan Dr Arif Alvi has expressed his gratitude for support and solidarity Pakistan had expressed with Azerbaijan and has condemned Armenia for its aggression, EDNews.net reports citing Dispatch News Desk.

According to a letter published by State-Run News Agency of Azerbaijan—AZERTAC, President Ilham Aliyev expressed gratitude to brotherly Pakistan for the enduring solidarity toward the just cause of Azerbaijan and expressed confidence that the relations of friendship and strategic partnership between Azerbaijan and Pakistan will continue to develop successfully.

First, I wish to convey my cordial greetings and express profound gratitude to you, on my own behalf and on behalf of the people of Azerbaijan, for your objective assessment of the events that unfolded at the state border between Azerbaijan and Armenia.

As you know, on 12 July 2020, armed forces of Armenia had blatantly violated the ceasefire regime and committed a military provocation, with the use of artillery, along the frontline in the direction of Tovuz district. This sudden and heinous attack had left military servicemen of Azerbaijan dead and wounded. Even though the attack was repelled thanks to counter fire and counteroffensive measures, Armenia’s military-political leadership carried on with its reckless and aggressive policy and ordered the bombardment of our military and civil installations.

These developments extend beyond a typical border skirmish and should be regarded as a continuation of Armenia’s policy of aggression. For nearly 30 years, 20 percent of Azerbaijan’s territory – Nagorno Karabakh region and seven surrounding districts have remained under Armenian occupation, with over one million Azerbaijanis expelled from their native lands. The conflict must be resolved in line with our country’s territorial integrity and sovereignty and in accordance with the norms and principles of the international law, relevant UN Security Council resolutions and articles of the Helsinki Final Act.

It is no coincidence that the very individuals that have gone unpunished for the genocide perpetrated in Khojaly in 1992, today continue to target and murder civilians, children, women, and the elderly. The death and injuries among the civilians, along with our military personnel, during the most recent events stand as vivid evidence of that.

As always, today Armenia’s leadership remains relentless in conducting its two-faced and hypocritical policy, aiming to mislead its public and the international community. They are pursuing a certain agenda by igniting the conflict with Azerbaijan against the backdrop of persisting socio-economic problems in their country. Armenia’s malicious and sordid provocation has been thwarted thanks to Azerbaijan’s military might and resolve and valor of our heroic sons, and that will remain to be the case in the future.

I once again express my gratitude to brotherly Pakistan for the enduring solidarity toward our just cause. I am confident that the relations of friendship and strategic partnership between Azerbaijan and Pakistan will continue to develop successfully.

I wish strong health and success to you, and everlasting peace and prosperity to the brotherly people of the Islamic Republic of Pakistan.

President of the Republic of Azerbaijan

It may be mentioned that on July 12, Armenia launched an unprovoked attack across the international border with Azerbaijan deliberately targeting the civilian population in violation of international law and the existing cease-fire between the two countries.

As a result, a number of civilian residents as well as Azerbaijani servicemen were killed and injured.

Armenian military continues indiscriminate shelling of Azerbaijani villages across the border with heavy artillery causing civilian casualties and destruction. The damage has been documented and represents another gross violation of international humanitarian law.