Police injured, 24 arrested in protests of US State of Oregon | Eurasia Diary - ednews.net

Azerbaijan has right to use its armed forces to take back its legally acknowledged territory - British journalist
Read: 2411

Police injured, 24 arrested in protests of US State of Oregon 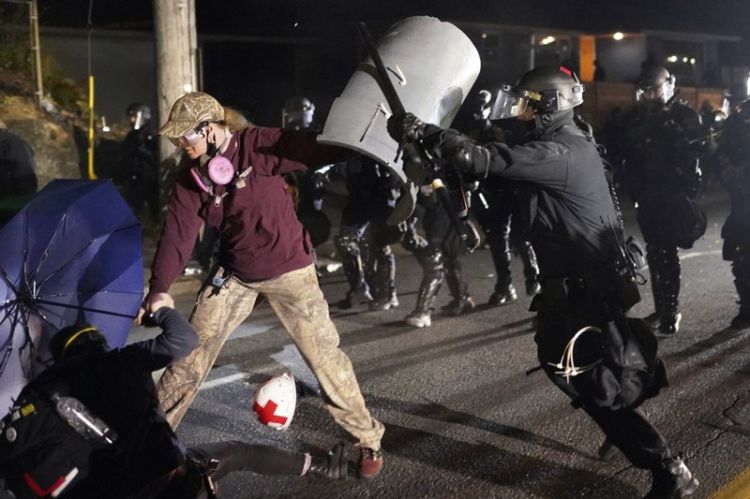 An Oregon State Police Trooper was struck in the head by a large rock and suffered a head injury, police said in a release. The trooper’s condition was not immediately known.

Some demonstrators filled pool noodles with nails and placed them in the road, causing extensive damage to a patrol vehicle, police said. Oregon State Police worked with Portland officers to clear the protesters.

“Officers are having rocks and chunks of concrete thrown at them,” police said on Twitter. “Individuals in the crowd are shining lasers trying to blind officers.”

Since George Floyd was killed in Minneapolis, protests over racial injustice and police brutality have occurred nightly for 70 days.

Portland police declared an unlawful assembly Friday night at the Penumbra Kelly public safety building, ordering everyone in the area to leave. Authorities had previously warned people not to trespass on the property.

Protesters remained for several hours before officers began to rush the crowd away from the building using crowd-control munitions early Saturday. Several people were arrested, police said on Saturday.

Police added that they arrested 24 people during the overnight demonstration. Most of those arrested were from Portland, while one man was from Oakland, California, and another was Tulsa, Oklahoma. Most were in their 20s or 30s.

The police also said officers are investigating a report on social media that someone threw explosive devices at protesters early Saturday morning in Laurelhurst Park. There are no reports that anyone was injured, the police said.

The charges included assault on an officer, interfering with an officer, disorderly conduct and resisting arrest.