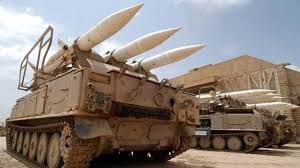 On some of the complexes, engineers tried to install AA-2 Atoll air-to-air missiles.

The army of Khalifa Haftar continues to successfully resist armed provocations by the formations of the Government of National Accord (GNA) of Libya. As part of protective measures, an audit of military equipment was carried out.

Specialists have updated tracked anti-aircraft missile systems Kvadrat, produced in the Soviet Union. Most of these air defense systems after the outbreak of the crisis in 2011 were inoperative.

After the repair, the complexes began to gradually return to the combat zone. LNA with the help of Kvadrat managed to shoot down several enemy aircraft, including the French fighter Mirage F.1 and the light attack aircraft L-39.

Haftar’s fighters also tried to install K-13 air-to-air missiles (NATO countries designate them AA-2 Atoll) on the air-to-air missile system. One piece of equipment must carry five of these missiles. However, at the moment there is no information confirming the use of such missiles by the Kvadrat complexes.