" Now, Armenians have two choices: Either they accept the situation or leave the country " - Rovshan Ibrahimov
Read: 350

Defense Minister meets with the Commander of the peacekeeping forces deployed in the Nagorno-Karabakh region of Azerbaijan
Read: 253

US urges Saudis to normalize ties with Israel 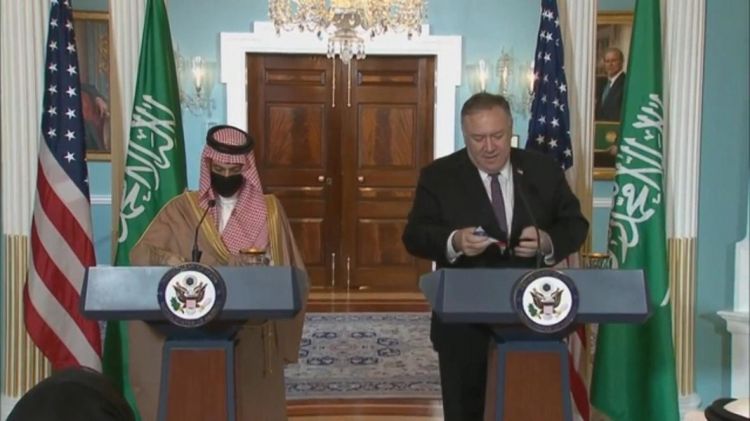 Pompeo urged Saudi Arabia to take part in diplomacy in the region as part of the controversial Abraham Accords that were signed in August to initiate normalization between Israel, the United Arab Emirates and Bahrain.

"We hope, too, that the Kingdom will encourage the Palestinian side to return to dialogue and negotiation with Israel," Pompeo said following talks with Saudi Foreign Minister Prince Faisal bin Farhan Al Saud.

"Doing so would only add to the Kingdom’s tremendous progress in promoting regional peace and prosperity on many fronts," he said.

As expected, talks turned to Saudi nemesis, Iran, and Pompeo reiterated the US' long-standing position that Tehran is a force for evil in the region.

Washington and Riyadh blamed Tehran after drone attacks on the world's largest oil company, Saudi Aramco, which caused a 6% production cut in global output and a 20% spike in crude prices in September 2019.

The Kingdom spent $68 billion on defense in 2018, ranking third in expenditure after the US and China. However, Riyadh received eyebrows from investors around the world amid security concerns after drone attacks on Aramco.

The company went public on the Saudi stock exchange, Tadawul, in December 2019 when its valuation reached $2.05 trillion on the second day of trading to become the world's most valuable company.

"The United States supports a robust program of arm sales to Saudi Arabia, a line of effort that helps the Kingdom protect its citizens and sustains American jobs," Pompeo said.

US President Trump signed letters of intent with Saudi Arabia in May 2017 for $110 billion for immediate arm sales and $350 billion over 10 years.

"The Iranian regime continues to provide financial and material support to terrorist groups, including in Yemen where the Houthis have launched more than 300 Iranian-made ballistic missiles and drones towards the Kingdom," Al Saud said.

Trump withdrew the US in 2018 from a historic Iran nuclear deal with world powers that was initiated by his predecessor Barack Obama.

Trump administration has long been accused of ignoring grave human rights abuses of Saudi Arabia by major Democrats and the international rights groups.