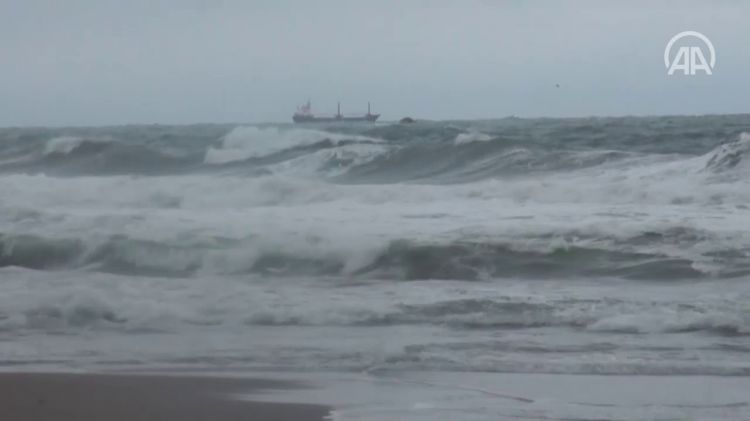 A Palau-flagged dry cargo ship sank off the coast of Turkey's Black Sea province of Bartin on Sunday, Eurasia Diary reports citing Anadolu Agency.
Rescue workers managed to save six crew members and reached the body of one other on the Arvin, which sank off the coast of Bartin province, said Bartin Governor Sinan Guner.
Guner told reporters that two bodies had still not been reached and there was a report that the other three crew members were spotted in a rocky area and that rescue teams were trying to reach the location by land.
He said if a coast guard command helicopter could manage to fly amid the bad weather conditions, the remaining crew would be saved, adding a ship belonging to the Naval Forces Command was also on the way.
Guner noted that the rescued personnel were in good health.
The Ministry of Transport and Infrastructure said in a statement that the ship broke into two pieces and sank in the area where it was anchored on Jan 17 at 12.35 pm.
The statement said that due to adverse weather conditions, the ship had anchored on Jan 15 in the administrative area of Bartin port.
It emphasised that after the accident, the Main Search and Rescue Coordination Centre under the ministry contacted the shipping company’s officials in Ukraine and were informed that 12 crew members were on board.
The Arvin was heading to Burgas Port in Bulgaria before the accident.
In a statement, the Turkish National Defence Ministry announced that the country’s navy deployed a frigate to support the rescue effort.
The Defence Ministry said search and rescue activities for the three missing persons from the ship's crew are continuing with the Coast Guard Command, Provincial Gendarmerie Command, Disaster and Emergency Management Authority (AFAD) and frigate teams from land and sea.
It added that helicopters are currently unable to take part in search and rescue operations due to the bad weather conditions. Following an improvement in the weather, search and rescue efforts will continue from the air.