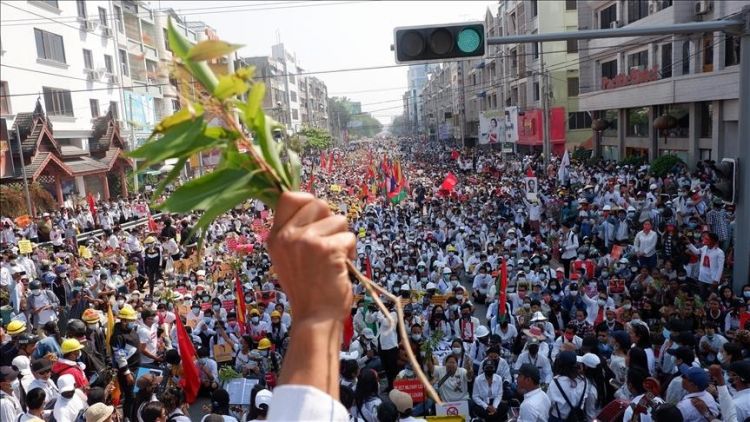 A total of 137 non-governmental groups from 31 countries urged on Tuesday the UN Security Council to immediately impose a global arms embargo on Myanmar in an open letter to council members, Eurasia Diary reports citing Anadolu Agency.

As a response to the Feb. 1 military coup in the country, the groups said their concerns have increased amid ongoing violations of human rights and the security forces' abuses against critics of the military rule, as well as against the Rohingya and other ethnic minority groups.

"Since February 1, the junta has increasingly used excessive and at times lethal force at demonstrations; threatened and arbitrarily detained activists, journalists, students, and civil servants; and imposed rolling internet shutdowns that put lives at risk," the letter said.

They added that the arms embargo would prevent supply, sale, transfer of all weapons and other military-related equipment, and it should be accompanied by robust monitoring and enforcement mechanisms.

For countries that permit arms transfers to Myanmar, such as China, India, Israel, North Korea, the Philippines, Russia, and Ukraine, the group said they should immediately stop the supply of any weapons, munitions, and related equipment.

"Supplying any equipment to the military enables further abuses and bolsters the junta’s ability to repress Myanmar’s people," Kenneth Roth, the executive director of the Human Rights Watch, said in a statement.

"Given the mass atrocities against the Rohingya, decades of war crimes, and the overthrow of the elected government, the least the UN Security Council can do is impose a global arms embargo on Myanmar," he added.

The coup took place hours before the country's new parliament was set to convene following November elections in which the NLD made sweeping gains.

The military claimed it launched the coup due to "election fraud" resulting in the NLD’s dominance.

The UN Human Rights Council has said it is “closely” following the events.