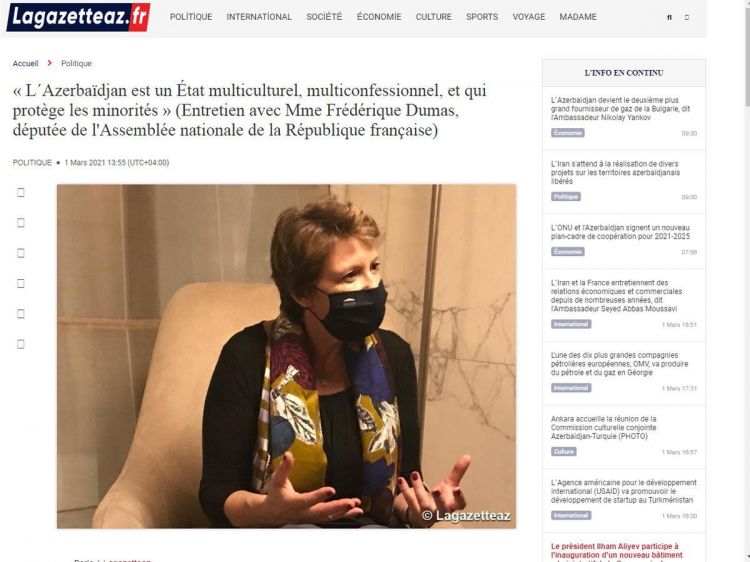 To provide the world with precise information about the state of the cultural heritage in Azerbaijan's Karabakh after the Armenian occupation, it is necessary to organize an international UNESCO mission, MP of the French National Assembly, Frederique Dumas, said, Eurasia Diary reports citing Trend.

Dumas made the remark in an interview with the French lagazetteaz.fr online newspaper.

“I think this is the most powerful tool to showcase the realities,” the MP noted.

“The organization of the UNESCO mission is very important, because this mission will more objectively show what happened. The main purpose of our visit to Karabakh with a group of French MPs was to show the situation in the territories of Azerbaijan after the occupation,“ said Dumas.

“Azerbaijan is a shining example of multiculturalism, protection of religions and cultures. Synagogues, Armenian churches and mosques in Baku are located nearby,” she stressed.

Commenting on the activities of the OSCE Minsk Group, Dumas noted that this authority should play the role assigned to it, that is, maintain neutrality, impartiality and ensure justice.

“The Minsk Group must show the way to peace and create opportunities for the peaceful coexistence of peoples,” the French MP emphasized.

Touching upon the resolution adopted in the French National Assembly during the Second Karabakh War on the necessity of recognizing the "Nagorno-Karabakh Republic", Dumas noted that very few MPs took part in the voting.

“However, the resolution was adopted. Some circles in France, trusting the Armenian community, which claims "we French are closer to you, we are also Christians", voted for the resolution to protect them. The French government made a big mistake by not responding in time. After this resolution, mistrust towards France has already aroused in Azerbaijan. Therefore, I believe that the adoption of this resolution is a political mistake,” Dumas added.