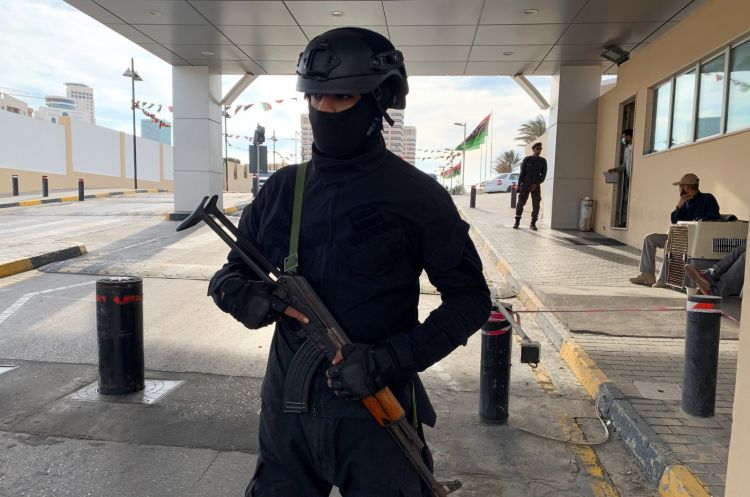 The advance team of a United Nations observer mission has arrived in Libya, which after a decade of conflict and chaos plans to hold elections in December, informed sources said Wednesday.
The group of about 10 United Nations staff flew into the capital Tripoli Tuesday to monitor a cease-fire between the country's two rival armed factions.
The unarmed observer team is also tasked with verifying the departure of thousands of mercenaries and foreign fighters who have been deployed in the oil-rich North African country and have so far shown no sign of leaving.
A diplomatic source in Tunis said the advance team, made up of the U.N. mission in Libya and experts from U.N. headquarters in New York, arrived Tuesday via the neighboring country's capital Tunis.
On its five-week mission, it is to travel to Sirte, a city on the Mediterranean coast halfway between the eastern and western power centers, as well as to Misrata in the west and Benghazi in the east.
A diplomatic source in New York said the team is due to submit a report to the U.N. Security Council on March 19 on the cease-fire and the departure of foreign troops.
According to the U.N., some 20,000 mercenaries and foreign fighters were still in Libya in early December. A Jan. 23, 2021 deadline for their withdrawal passed without any signs of them pulling out.
The Security Council in early February ordered U.N. Secretary-General Antonio Guterres to deploy the vanguard of observers in Libya, following the Oct. 23, 2020 cease-fire deal.
In a report late last year, Guterres himself had advocated an unarmed observer group be made up of civilians and retired military personnel from African Union, European Union and Arab League member states.
Earlier last month, Libya embarked on a new phase of its post-Moammar Gadhafi transition after an interim executive was selected to lead the country until December elections following a decade of chaos.
During the process of conflict, foreign mercenaries and arms have poured into the country since putschist Gen. Khalifa Haftar launched his offensive targeting the capital Tripoli.
Despite the deadline for the departure of foreign mercenaries from Libya under an October cease-fire passing last month, calls to accelerate the process continue as no movement has been announced or observed on the ground.
The Russian Wagner Group, which is owned by businessperson Yevgeny Prigozhin, a figure close to Russian President Vladimir Putin, is known as one of the main groups that sent mercenaries to fight in Libya.
The Wagner Group has been instrumental in assisting Russia to achieve its military goals in Ukraine, Sudan, Syria and Libya.
In June, the United States Africa Command (AFRICOM) revealed that 2,000 Russian mercenaries from the Wagner Group had been operating alongside Haftar forces.
The U.S. also last year imposed sanctions on three individuals and five entities that are linked to the Wagner Group, after accusing the mercenary group of laying landmines in and around Libya’s capital Tripoli.
During a phone call on Thursday, Turkey's President Recep Tayyip Erdoğan told Putin that the opportunity for peace and stability in Libya should not be wasted.