Bin Salman’s statement on Iran is connected to presidential change in US - Expert
Read: 184

Iran-Pakistan Ties Should Thwart Impacts of US Sanctions - Zarif 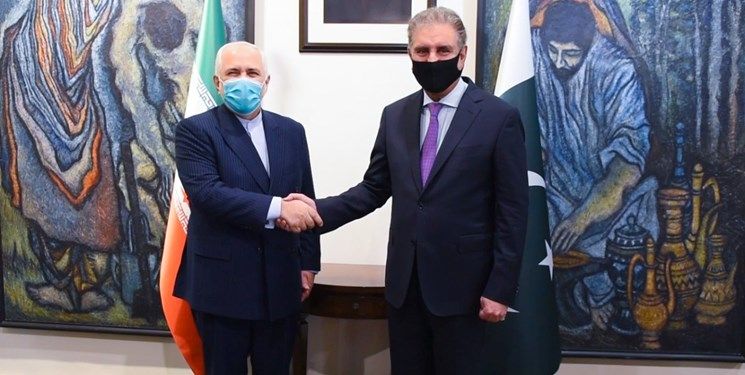 Iranian Foreign Minister Mohammad Javad Zarif in a meeting with his Pakistani counterpart Shah Mehmoud Qureshi underlined that relations between the two countries should broaden to the extent that they can thwart the US sanctions, Eurasia Diary reports citing Fras News Agency.

“This cooperation will improve the situation of the countries’ [respective] nationals and reinforce the relationship between the two peoples,” Zarif said during the meeting on Wednesday.

He also touched on earlier opening of a third border crossing between the countries, saying the development signaled the two sides’ determination in expanding their economic and business ties.

The countries’ ties have to develop in such a way that it can avert the harm that is intended by the United States’ oppressive sanctions, Zarif, meanwhile, asserted.

The meeting featured signing of a memorandum of understanding on border markets.

“Three official border crossings and creation of six border markets will help the cross-border trade to flourish and thus contribute to people’s lives in the region,” the Iranian official said.

In the same context, Zarif called security and stability in the border area a “key element” in improvement of the lives of those, who reside there. He, therefore, underlined the importance of confrontation with organized crime and illegal migration across the border expanse.

Finally, Zarif underscored the need for Tehran and Islamabad to keep up their consultations on various issues, including the future of Afghanistan -- which shares borders with both countries and from which violence could spill over into either.

The two discussed issues of common interest, with Zarif urging enhancement of bilateral cooperation in the consular and judicial areas.

Qureshi, for his part, also stressed the need for development of the common relations, and noted how the ties rested on “deep-seated cultural-civilizational bases.”

He welcomed increase in the two sides’ cooperation in the consular and judicial fields as well as the situation of the countries’ prisoners.

The top diplomat likewise demanded development of the bilateral economic and commercial ties.

He also conveyed Islamabad’s support for underway talks on the Joint Comprehensive Plan of Action (JCPOA) -- the 2015 nuclear deal between Iran and world countries. The negotiations are examining the potential of the agreement’s restoration after the US left it in 2018.

Finally, the Pakistani official made mention of the countries’ shared views on various subject matters, including the situation of Muslims around the world, the issue of Palestine, and the importance of global multilateralism.

Qureshi arrived in Tehran on Tuesday on a three-day official visit for talks on mutual relations and the latest regional security issues with senior Iranian officials.

His visit is taking place at the invitation of Zarif.