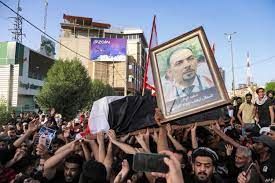 An Iraqi journalist was left seriously wounded after being shot in the head early Monday, witnesses and doctors told AFP, 24 hours after leading anti-government activist Ehab al-Wazni was shot dead.

Reporter Ahmed Hassan was in intensive care after receiving “two bullets in the head and one in the shoulder,” a doctor told AFP. “He was targeted as he got out of his car to go home,” in Diwaniyah in the south of the country, according to a witness.