Turkey, Pakistan vow to work together to stop Israeli attacks against Palestinians 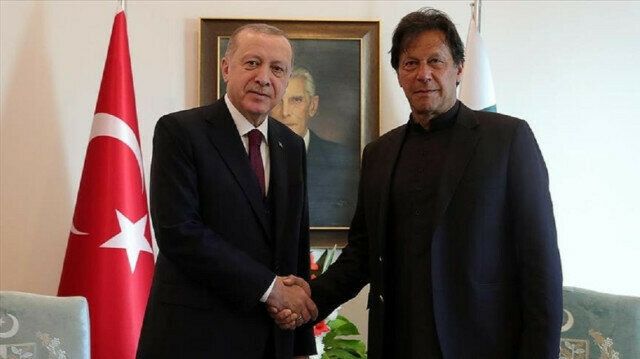 Stressing Turkey’s effort to make sure Israel faces concrete sanctions over its attacks on Palestine and its “inhumane and unlawful actions” towards Jerusalem, the Gaza Strip, and the Al-Aqsa Mosque, Erdogan told Khan that the efforts of Turkey and Palestine carry great importance to teach Israel a powerful and intimidating lesson.

-Turkey, Pakistan vow to work together

In a statement on the call, Khan’s office said: “The two leaders exchanged views on Israel’s heinous attack during (the Muslim holy month of) Ramazan on the Al-Aqsa Mosque and the worshippers inside as well as on Gaza violating all norms of humanity and international law.”

The two leaders “vowed to work together especially at the United Nations in jointly mobilizing the international community to help stop these attacks.”

“The leaders also agreed that the two Foreign Ministers would be working closely together to raise the Palestinian issue at the international level,” the statement added.

“The regional security situation also came under discussion between the two leaders. Appreciating Turkey’s role, the Prime Minister stressed the importance of a responsible withdrawal and added that Pakistan would continue to extend all possible support to the efforts for a political solution for durable peace and stability in Afghanistan.”

“Both leaders discussed further strengthening of bilateral relations and agreed that the momentum of high-level exchanges between Pakistan and Turkey would continue,” it added.

Tensions have been running high since an Israeli court last week ordered the eviction of Palestinian families from the Sheikh Jarrah neighborhood of East Jerusalem.

The latest death toll from ongoing Israeli attacks in the Gaza Strip rose to 65, including 16 children, the Palestinian Health Ministry said on Wednesday.

Five women are among the victims, it said, while 365 people are injured.

Israel occupied East Jerusalem during the 1967 Arab-Israeli war and annexed the entire city in 1980 – a move that has never been recognized by the international community.