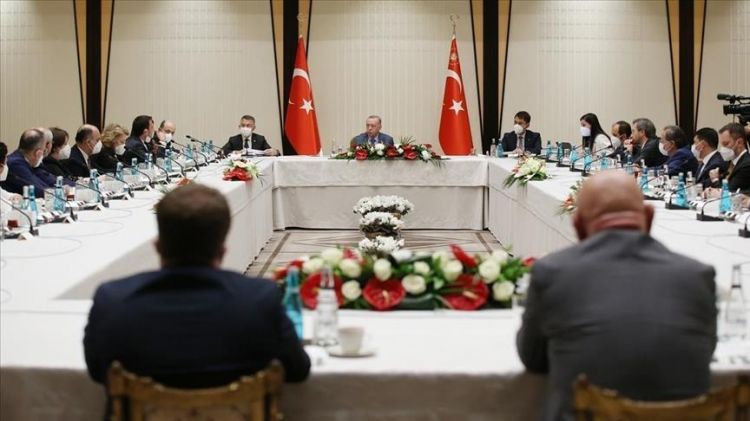 Turkey’s president chaired a meeting late on June 10 at the Presidential Complex in the capital discussing solutions to the mucilage problem in the Sea of Marmara, Eurasia Diary reports citing Hurriyyet Daily.

Recep Tayyip Erdoğan said authorities have intensified inspections at all sewage and solid waste facilities while examining developments at sea.

An academic committee formed by the country’s Higher Education Council took part in the meeting to discuss scientific solutions to the problem.

Erdoğan listened to its proposed solutions and recalled the latest measures taken against the problem of increasing mucilage.

The committee released a final declaration evaluating the academic studies on solutions to the problem.

It said the phenomenon occurred because single-celled organisms reacted to changing environmental conditions by discharging their intracellular organic liquids more and/or faster than normal.

Among the changes in the environmental conditions were increasing population density in the region, exposure to domestic or industrial wastes, loss of habitat and increasing sea temperatures due to climate change, it added.

Concerning the results of the phenomenon, the declaration explained that mucilage, which is rich in various pollutants, goes down to the sea bottom and disrupts the structure of the benthic flora and fauna, limiting the lives of the creatures living there.

While increasing the rate of accumulation of heavy metals within the mucilage mass formed, it is also expected to decrease the level of oxygen in the Sea of Marmara.

As for the solution, the academics highlighted the importance of prioritizing the health of the sea ecosystem in the planning of activities in the Sea of Marmara.

“The ecology of the Sea of Marmara has lost its durability and has become vulnerable to external factors,” the declaration noted.

It added that risks such as harmful algae, jellyfish overgrowth and hydrogen sulfide formation are also present in the Sea of Marmara.

Underlining the significance of holistic approaches, the declaration proposed that “the entire surrounding of the Sea of Marmara should be declared a protection zone within a certain plan.”

It noted that while ensuring that sewage water does not return to the sea after treatment and is instead used for irrigation, inputs of terrestrial origin should be deeply discharged after undergoing advanced biological treatment.

Determining the temporal and spatial distribution of mucilage, reactive oxygen dosing with mobile platforms on the Marmara coast should be investigated, it said.

It further noted that integration of existing treatment plants with advanced treatment technologies should be ensured and a monitoring committee should be established.

Mucilage, also known colloquially as “sea snot,” is the overgrowth of microscopic algae called phytoplankton. The thick, mucus-like slimy layer contains a variety of microorganisms and is caused by rising seawater temperatures due to global warming, stagnant water and pollution.

The 22-point action plan to clear the recent surge in mucilage will be jointly carried out by the Environment and Urbanization Ministry, Transportation and Infrastructure Ministry and Agriculture and Forestry Ministry.

The Health Ministry, Interior Ministry, related institutions, NGOs and coastal municipalities under the coordination of governorships are also taking part.