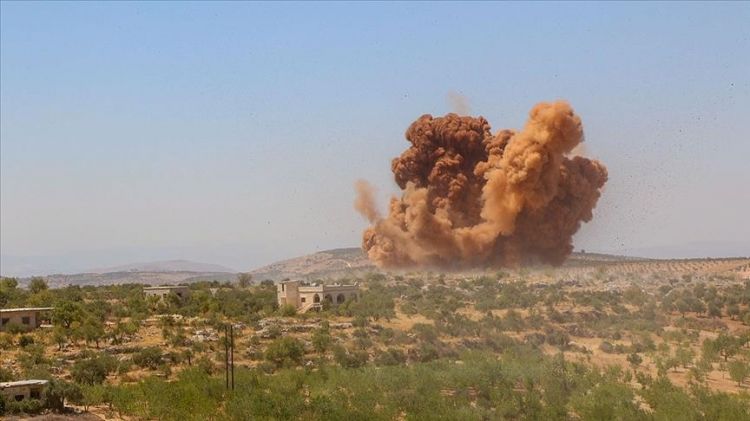 Syrian regime forces renewed their attacks on the Daraa al-Balad neighborhood in southwestern Syria following the failure of Russian-led mediation talks between the regime and opposition forces, a local group said on Tuesday.
According to Horan Freedoms Community, a group founded by activists and journalists from Daraa, the Bashar al-Assad regime demanded that both residents and armed opposition groups surrender all their light weapons, search the houses, and set up nine checkpoints in the Daraa al-Balad neighborhood.
The demands, however, were rejected by the Daraa-based Reconciliation Center which was negotiating on behalf of the residents.
Following the inconclusive talks, regime forces shelled the besieged neighborhood last night, forcing many civilians to move to other relatively safer neighborhoods.
Daraa, known as the birthplace of the Syrian revolution, is home to some 40,000 people and was an opposition stronghold until 2018.
On July 29, the Assad forces and Iranian-backed militia launched a ground operation in the neighborhood, triggering clashes that spread across the countryside. Fifteen civilians have been killed.
Daraa al-Balad was blockaded by regime forces on June 25 after residents, including former members of the Syrian opposition, resisted an order to surrender their light weapons and allow regime forces to search houses in the area.
According to the Reconciliation Center and local figures, the order was opposed because it violated the terms of the Russian-mediated 2018 deal, under which the residents and ex-opposition members had to surrender all heavy weapons.
The deal allowed thousands of rebels and civilians safe passage to other opposition-held regions, while Russia-backed regime forces launched an attack to reclaim Daraa.
The regime began its military action despite agreeing last week to lift the blockade