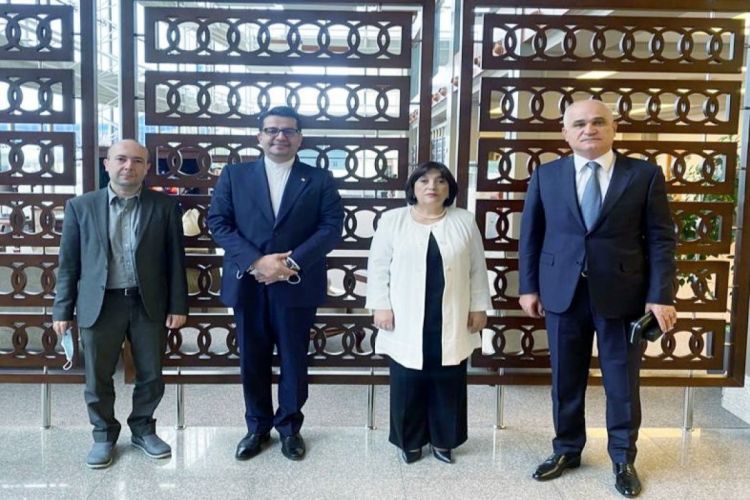 Chair of the Milli Majlis Sahiba Gafarova left for the Islamic Republic of Iran on 5 August to attend the swearing-in ceremony of President Elect of that country Sayyid Ebrahim Raisi, Press and Public Relations Department of the Milli Majlis told Media.
The delegation led by the Milli Majlis Chair were met at the Mehrabad International Airport of Tehran by Deputy Chairman of the Islamic Consultative Assembly Mutafakkir Azad and Ambassador of Azerbaijan to Iran Bunyad Huseynov. The delegation consists of Deputy PM Shahin Mustafayev, Deputy Foreign Minister Fariz Rzayev and other officials of the Azerbaijan Republic.
It is planned for Chair of the Milli Majlis Sahiba Gafarova to hold talks with a number of Iranian state officials during this visit. Azerbaijani delegation led by the chair of the Parliament Sahiba Gafarova visited Tehran in order to participate in the inauguration ceremony of newly elected President of Iran Ebrahim Raisi, Iranian Ambassador to Azerbaijan Seyed Abbas Mousavi tweeted, APA reports.
"A high-level delegation including the Speaker of the Parliament of the Republic of Azerbaijan, Deputy Prime Minister and Deputy Foreign Minister left for Tehran to attend the inauguration ceremony of Iranian President Ebrahim Raisi. Neighbours' friendship and brotherhood relations are permanent,” the Iranian diplomat noted.