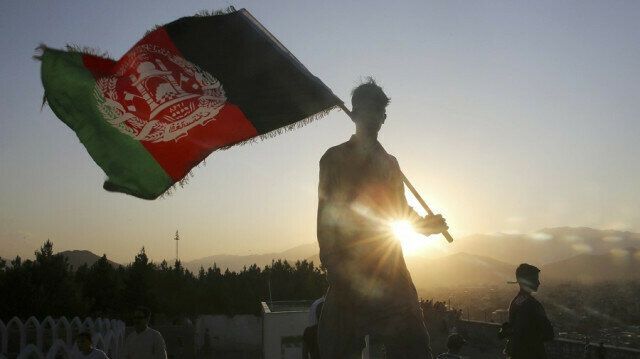 Hundreds of Afghans gathered in Paris on Sunday, waving their country’s black, red, and green national flag, demanding resettlement of families of asylum seekers and former employees of the French mission in Afghanistan.
The demonstrators gathered at the landmark Place de la Republique in the capital city with flags and placards in support of the Afghan refugees. The initiative was organized by NGOs working with Afghan refugees and migrants living in France.
In Paris, at Place de la Republique, all sorts of protests take place, while hundreds of homeless Afghans and other refugees have also sought shelter pitching their tents on several occasions.
"A humanitarian disaster is on the way, we must prevent it now, open humanitarian corridors so that people who want to go out can leave," BFMTV news quoted Reza Jafari, the head of the Afghanistan Children's Association and Beyond, and one of the organizers of the demonstration.
Demonstrators demanded immediate repatriation of the families of the civilian staff of the French diplomatic mission, military, and NGOs in Afghanistan, those fearing persecution in the hands of the Taliban regime and of Afghan nationals exiled in France along with those without the protection of refugee status. They said thousands of former Afghan employees were still stuck in Kabul, waiting to be evacuated.
Since the fall of Kabul to the Taliban on Aug. 15, the French mission has organized five evacuation flights repatriating at least 400 Afghans and their families at risk.
On Sunday, the fifth flight reached Paris, carrying 200 Afghan and French nationals from the United Arab Emirates, while another 600 former Afghan employees have been repatriated since May.
Although evacuating French nationals and Afghans at risk is a priority, President Emmanuel Macron's speech -- warning to protect Europe against "irregular migratory flows" emanating from the security instability in Afghanistan -- led to an outcry among French NGOs as well as socialist, left-leaning political class.
Mayors of several large French cities have shown willingness to accommodate Afghan refugees and demanded the government to accept more migrants. Associations of lawyers, refugees, and migrants have also requested the Macron administration to open “legal channels so that all persecuted Afghans and Afghans who request it, as well as the families of those who are already beneficiaries of the international protection granted by France, can quickly reach French soil directly.”
Afghans comprise one of the highest number of asylum seekers in France, with an average of 10,000 people applying for the status annually. However, less than 60% of these requests are accepted by the Office for the Protection of Refugees and Stateless Persons. Many of these rejected applicants continue to live as homeless and paperless on the streets and face violent harassment at the hands of security agencies.