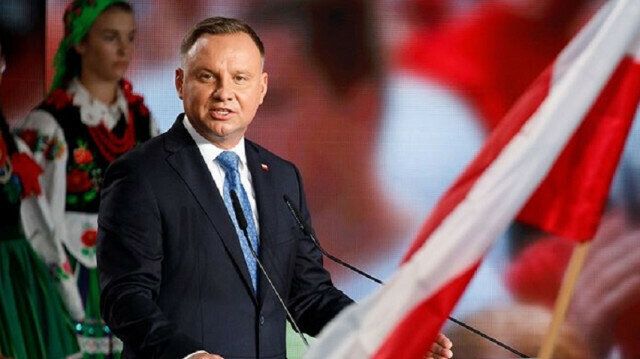 Poland’s president urged NATO on Thursday to bolster its eastern flank in response to a Russian military build-up on the border with Ukraine, Yeni Safak reports.

“Caution and vigilance from NATO, which is responsible for the military security of the allies, is necessary,” Andrzej Duda said at a news conference alongside NATO Secretary-General Jens Stoltenberg, following a visit to the alliance's headquarters in Brussels.

He said it would be sufficient to strengthen NATO's presence in the region, at least temporarily, and it could be done by directing additional units, intensifying NATO air policing operations, monitoring activities or increasing the preparedness of soldiers from NATO missions already deployed on the eastern flank.

Apart from the Russian build-up, Poland’s border conflict with Belarus was also addressed in a meeting with Duda and Stoltenberg.

Duda argued that Belarus is carrying out a hybrid attack on the EU, which he said is part of a package of destabilizing aggression by Minsk and Moscow, along with a recent drastic increase in gas prices and a reduction in supplies, and the Russian military mobilization around the Ukrainian border.

“They have to be coordinated. It’s hard to assess it otherwise,” said Duda.

"All NATO allies have made clear that they strongly condemn the (Belarus President Alexander) Lukashenko regime’s exploitation of vulnerable people to pressure neighboring countries. This is inhumane and cynical, and we stand in full solidarity with the allies affected," he said.

Referring to the Russian military build-up, Stoltenberg urged Russia to be transparent, reduce tensions and de-escalate.

"NATO remains vigilant, and we continue to provide Ukraine with political and practical support," he said.

Fighting between Ukrainian government forces and pro-Russian separatists since 2014 in Donbas has seen more than 13,000 people killed -- a quarter of them civilians -- and as many as 30,000 wounded, according to the UN.

Media reports in recent weeks said US officials told Europe of their concerns about possible Russian preparations for a Ukraine invasion.

This spring, Western countries were alarmed by what they called a military buildup near Donbas before Russia pulled its troops back.

Tensions concerning Russian intentions in Ukraine are fueled by memories of its 2014 takeover of the Crimean Peninsula.

Russian forces entered the peninsula in February of that year, with Russian President Vladimir Putin formally dividing the region into two separate federal subjects of the Russian Federation the following month.