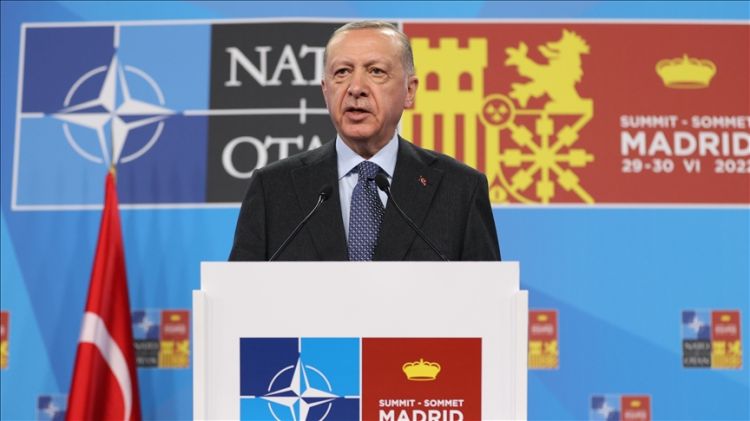 As a result of Türkiye's efforts in Madrid, PKK/PYD/YPG and FETO were written off as terror groups in NATO's records for the first time, said the Turkish president on Friday, Ednews reports citing Anadolu Agency,

Speaking to reporters while returning from the NATO summit, Recep Tayyip Erdogan said the decisions taken at Madrid will bear fruit in time.

“Promises that were made are of course important but the main point is the implementation," he said on the landmark memorandum signed between Finland, Sweden and Türkiye.

With the signing of the memorandum, Türkiye lifted an objection to the Nordic countries' NATO bid. In return, Finland and Sweden will address Türkiye's terrorism concerns.

However, Erdogan said Türkiye will be cautious as "a country that has repeatedly been stabbed in the back in its fight against terrorism."

"We will closely monitor whether the promises made to our country are fulfilled in the coming period," he further said.

On relations with Greece, Erdogan said that NATO leaders whom he met in Madrid offered to intermediate to organize talks with Greek Prime Minister Kyriakos Mitsotakis.

“We said ‘sorry, but we don’t have time for such a meeting right now.’ Because it is obvious that they are militarizing the islands,” said Erdogan.

In the backdrop of NATO's new security policy, Erdogan said his country is maintaining a "balanced policy" in relations with Russia and Ukraine, as it does not want any harm to its "diplomatic traffic".

NATO leaders on Wednesday approved the 2022 Strategic Concept, a blueprint for the alliance for the next decade.

It covers the alliance’s priorities and goals for the next 10 years, and sets its joint position on emerging challenges, including Russia, while also addressing China for the first time.

It cites the “deepening strategic partnership” between China and Russia as a threat, saying that “their mutually reinforcing attempts to undercut the rules-based international order run counter to our values and interests.”

In its more than 35-year terror campaign against Türkiye, the PKK has been responsible for the deaths of more than 40,000 people, including women, children and infants.​​​​​​​ The YPG is its Syrian offshoot.

FETO and its US-based leader Fetullah Gulen orchestrated the defeated coup of July 15, 2016 in Türkiye, in which 251 people were killed and 2,734 injured.