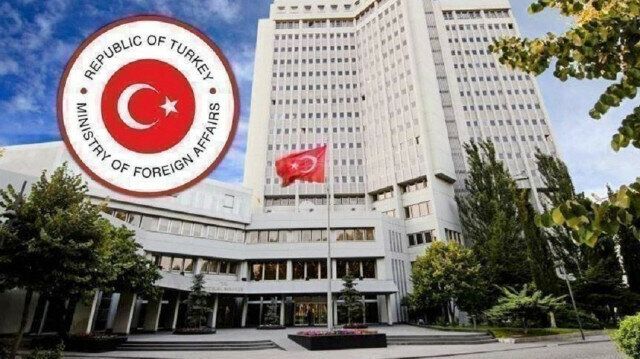 Türkiye on Sunday condemned attempts by hundreds of Israeli settlers to force their way into the flashpoint Al-Aqsa Mosque complex in occupied East Jerusalem, as well as ongoing Israeli attacks that have caused the deaths of Palestinian civilians, Yeni Safak reports.

In a statement, the Turkish Foreign Ministry said recent Israeli airstrikes in the Gaza Strip, which began on Friday, had resulted in the deaths of many civilians, including children.

It added that on Sunday, "fanatical Jewish groups," including Israeli lawmaker Itamar Ben-Gvir, stormed the Al-Aqsa Mosque under police protection.

The ministry "strongly condemned" the Israeli attacks on civilians, as well as the attempts to pray at the Al-Aqsa Mosque, calling them "provocative actions" that openly violate the status quo of the flashpoint area in occupied East Jerusalem.

It underlined that such actions would further fuel tensions in the region, calling on Tel Aviv not to allow such actions aimed at status and spirituality of the Al-Aqsa Mosque complex.

Israeli warplanes continued airstrikes in the Gaza Strip for the third day on Sunday, for what the army said was to prevent an "imminent threat of attacks" by the Islamic Jihad group.

At least 31 Palestinians have been killed, including six children and four women, and over 275 others injured in the Israeli offensive, according to the Palestinian Health Ministry.

The attacks came amid rising tensions across Palestinian territories following the detention of Bassam al-Saadi, a senior leader of Islamic Jihad, in an Israeli raid in the occupied West Bank city of Jenin early this week.

The Israeli army said the Gaza offensive may last for a week. But the head of Israel’s domestic intelligence service Shin Bet on Sunday recommended ending the Gaza offensive, saying the onslaught achieved its goals by dealing a heavy blow to the Islamic Jihad group.