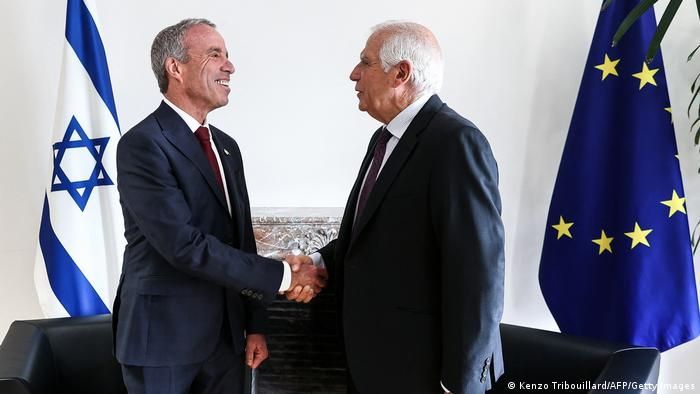 Representatives from the European Union and Israel held high-level talks on Monday for the first time in a decade, Ednews reports citing DW.

The EU said it would press Israel on stalled peace efforts and the situation in the Palestinian territories during the talks in Brussels.

This is the first time the bloc has held an "Association Council" meeting with Israel since 2012.

What will the EU, Israel talks address?

"We will discuss frankly and openly about some specific issues which are of our mutual concern," EU top diplomat Josep Borrell said at the start of the meeting.

"I am talking about the situation in the Palestinian territories and the Middle East peace process, which is stalled."

Borrell expressed support for a speech by Israeli Prime Minister Yair Lapid to the UN General Assembly, in which the Israeli leader called for an "agreement with the Palestinians based on two states for two peoples."

"This is also what we want to push for," Borrell said. "We want the resumption of a political process that can lead to a two-state solution and a comprehensive regional peace. We have to explore how we can put this into practice."

In a speech he delivered to the UN General Assembly after Lapid, Palestinian President Mahmoud Abbas said "our confidence in achieving a peace based on justice and international law is waning, due to the Israeli occupation policies."

Borrell said that a UN report on the situation in the Palestinian territories was "worrisome." According to the report, the number of Palestinians killed this year reached its highest level since 2007.

Israel and the EU also differ on attempts to revive the 2015 nuclear deal with Iran. Last month, Lapid said returning to the nuclear agreement would be a "mistake" at a joint press conference with German Chancellor Olaf Scholz.

"This is one of the issues in which certainly we disagree," Borrell said. "For the time being in any case, those (nuclear deal) negotiations are stalled."