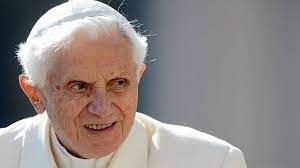 Pope Emeritus Benedict XVI has died, aged 95, at his Vatican residence, the Vatican said on Saturday.
"With sorrow, I inform you that the Pope Emeritus, Benedict XVI, passed away today at 9:34 (0834 GMT) in the Mater Ecclesiae Monastery in the Vatican," Vatican spokesman Matteo Bruni said in a statement.
Further information would be provided as soon as possible, he added.
Born Joseph Ratzinger in Germany in 1927, Benedict became a theologian, before succeeding John Paul II as pontiff of the Catholic Church in 2005. He led it for some 8 years before stepping down in 2013, the first Pope to do so in almost 600 years.
In recent days, his successor Pope Francis had asked Catholic worshippers to pray for Benedict XVI who had became "very ill" and monitored by doctors.