Russia has potency to produce intermediate-range missile in 6 months, depending on US steps
Read: 498

Russian warships launched a massive missile attack on the terrorists near Aleppo
Read: 426

Will Azerbaijan join the anti-Iran coalition? 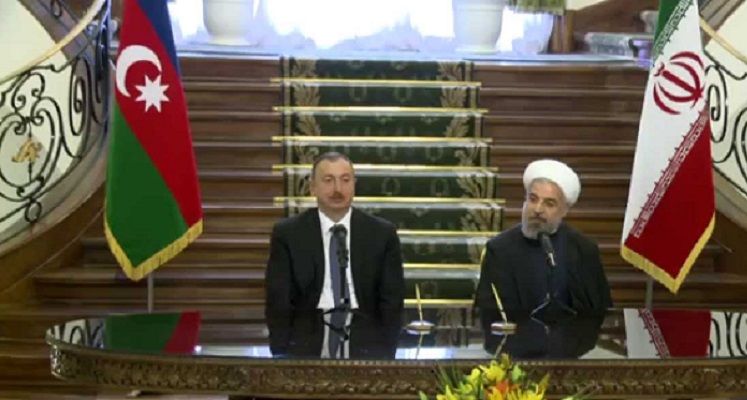 As the United States speeds up the militarization of tensions with Iran, the role of neighbouring countries in either exacerbating or mitigating them is going to be crucial.

Some of Iran´s neighbours, such as Saudi Arabia, Israel, and, until recently, the United Arab Emirates, appear to be pushing the United States toward war with Iran. Others, such as Iraq, Oman, and Qatar, pursue a policy of “active neutrality”, seeking diplomatic engagement between Washington and Tehran. And still others sit on the fence, carefully monitoring developments, but without positioning themselves on either side. That, however, can change should the situation degenerate into a military confrontation.

One of the actors belonging to the latter group is Azerbaijan. Iranian Foreign Minister Javad Zarif, in his speech in the Asia Society in New York in April 2019, singled out Azerbaijan as one of the countries with which Iran´s relations have recently improved. That is true, but Azerbaijan also enjoys close relations with two of Iran’s antagonists—the United States and Israel. Should tensions erupt, Azerbaijan will come under pressure from both to provide at least tacit support in their campaign against Iran, such as the use of Azerbaijani territory for anti-Iranian intelligence activities, if not as a launching pad for military attacks. The last time a military action against Iran over its nuclear program seemed plausible, in August 2011, Iranian Major General Hassan Firouzabadi angrily rebuked Baku for allegedly turning itself into an Israeli outpost, and predicted an uprising of its people against Azerbaijani President Ilham Aliyev.

Another potential fallout of a conflict involving Iran would be a re-ignition of irredentist claims on Iranian Azerbaijan, where, according to some sources, up to a quarter of Iran’s population lives. Although Baku officially distances itself from these claims, the notion of a “south Azerbaijan” that needs to be “liberated from the Persian yoke” is still very much present in Azerbaijani political and intelligentsia circles. If Iran is destabilized, pan-Turkist agitators from both north and south will try to seize the momentum to advance their long-cherished dream of a “Great Azerbaijan”. Some pro-regime change circles in the United States and Israel have long advocated Iran’s balkanization—i.e., its disintegration along ethnic lines. The government in Baku, far from harbouring any sympathies to Iran, might at some point be compelled to “help the southern brethren”.

Conscious of these complexities, Iran has studiously avoided antagonizing Azerbaijan. On the most critical issue for Baku—its unresolved conflict with Armenia over the Nagorno-Karabakh region—Tehran has firmly supported Azerbaijan’s territorial integrity within its internationally recognized borders. Even Azerbaijan’s attempts of appropriate Iran’s cultural heritage—such as claiming exclusive ownership of the famous Persian poet Nezami Ganjavi, who lived in the territory of modern Azerbaijan in 13th century—have been met only with the mildest of Iranian rebukes.

Iranians have thus clearly signalled their preference for maintaining the status-quo in their relations with Azerbaijan. If, however, Azerbaijan is persuaded or pressured to support an American or Israeli military action against Iran, they are likely to revert to the tactics they used in 1990s: manipulating and securitizing pro-Iranian Shiite groups in Azerbaijan to pressure the Aliyev administration.

Back in the 1990s, Azerbaijani authorities were afraid of the Shiite challenge to Aliyev’s rule, and primarily used repression to quell it. The emergence of the Wahhabi threat, associated with organizations like the Islamic State, diminished the urgency of the Shiite threat. The authorities also adopted a somewhat more nimble approach to Shiites: repression was complemented with cooptation, with some success.

For example, according to Altay Goyushov, an Islam expert from the independent Baku Research Institute, Hajji Shahin Hasanli, one of the most charismatic and popular Shiite preachers, used to be the leader of a movement called Ikmal in 1990s that was considered to be Khomeinist by Azerbaijani authorities. Now he is a representative of the Spiritual Board of Muslims of the Caucasus, a Soviet-era leftover designed to control religious life in Azerbaijan. He preaches in one of the most popular mosques in Baku, but one that has—highly unusually—a national flag foisted upon it, in a clear symbol of the state’s tight control of Islam. Clerics with more oppositional leanings, such as Iran-trained Hajji Ilgar Ibrahimoglu, who is also well-versed in Western human rights discourse, are marginalized. And those considered by the authorities radical and dangerous, like Taleh Baghir-zade, the leader of the Muslim Unity movement, linger in jail, reportedly subject to torture.

This mix of repression and cooptation seems to have ensured a semblance of calm and stability in the religious sphere. But that may be a deceptive impression. Widespread discontent with social conditions and corruption, in addition to the demise of the secular opposition, enlarges the pool of potential recruits for Shiite Islamists. And the opposition to Azerbaijan’s potential involvement in a war against Iran may not come only from these circles. In the absence of credible surveys, it is difficult to gauge Azerbaijanis’ real attitudes to Iran. Some may indeed harbour ill feelings, either out of pan-Turkist or anti-Islamist sentiment, but there are also ample reasons to believe that many do not share those views, especially outside Baku. In 2018, Azerbaijanis were second only to Iraqis in numbers of visitors to Iran, mostly for medical and religious reasons. Many also transit Iran en route to Shiite pilgrimage sites in Karbala and Najaf in Iraq.

Even supporters of the “Great Azerbaijan” should be careful about what they wish. The external players who appear to support this idea do so because their wish is to see a disintegrated Iran, not a new powerful Azerbaijani state. Such a hypothetical state would deepen the already existing cleavages in Azerbaijani society between secular and religious citizens, Shiites and Sunnis, Azeri Turks and non-Turkic minorities, and add new ones between “northern” and “southern” Azerbaijanis. It is, for example, inconceivable that Tabriz, the centre of Iranian Azerbaijan, would accept the political dominance of Baku. Moreover, a mere attempt to establish such a state could only possibly come as consequence of a war with Iran. Such a war would plunge Azerbaijan into a vortex of messy and bloody Middle Eastern politics, all this with the Nagorno-Karabakh conflict with Armenia still unresolved. If America’s war on Iran can be avoided, this nightmare scenario will not materialize. In the opposite case, however, no Iranian neighbour will be left unscathed, including Azerbaijan.

Eldar Mamedov has degrees from the University of Latvia and the Diplomatic School in Madrid, Spain. He has worked in the Ministry of Foreign Affairs of Latvia and as a diplomat in Latvian embassies in Washington D.C. and Madrid