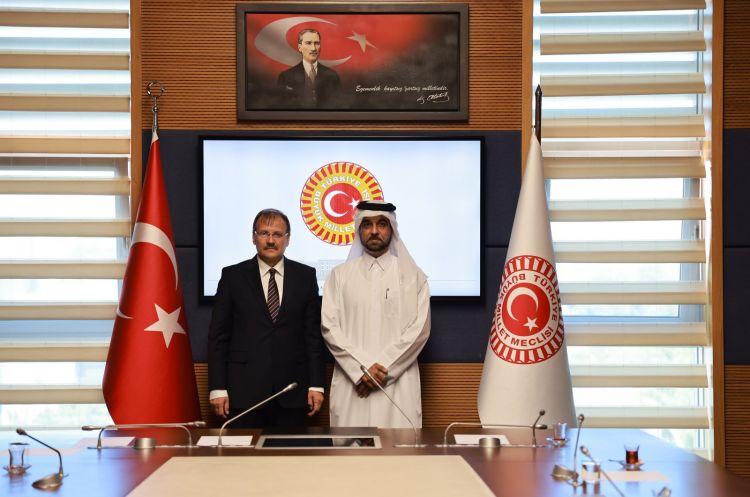 In his speech at the reception, Çavuşoğlu said that the seventh meeting of the Turkey-Qatar High Strategic Committee, held in Doha on Dec. 7, 2021, chaired by President Recep Tayyip Erdoğan and Emir of Qatar Sheikh Tamim bin Hamad Al Thani, contributed to the consolidation of relations in many areas.

Stating that the Turkey-Qatar High Strategic Committee is the highest level institutional cooperation mechanism between the two countries, Çavuşoğlu pointed out that a total of 83 documents were signed during the meetings, highlighting the function of the committee. Çavuşoğlu stated that Turkey would host the eighth meeting of the Turkey-Qatar High Strategic Committee this year.

Noting that Turkey and Qatar share a common approach to displaying solidarity in the face of common challenges, Çavuşoğlu said: "Especially in these days when we need dialogue and calls for peace the most, we, as Turkey, attach great importance to dialogue and diplomacy efforts and support every step in this direction."

Stating that the cooperation and coordination established between countries on regional issues, especially Palestine, Libya and Afghanistan, contributes to the protection of national interests as well as ensuring regional peace and stability, Çavuşoğlu said: "As Turkey, we will continue our stance that prioritizes diplomacy and dialogue with all parties, similar to Qatar."

Çavuşoğlu stated he believes that Qatar hosting the 2022 World Cup will have an important place in the history of FIFA in many respects. "We have no doubt that this tournament will be a great success, just like every organization you organize. I would like to state once again that we are ready to continue to contribute to the success of the tournament."

Noting that within the scope of the agreements signed with Qatar, more than 2,000 Turkish police officers will work in Qatar at the 2022 World Cup. "We do not see the stability and security of the Gulf region as separate from our own stability and security. As Turkey, we are in an effort to further develop our relations with all Gulf countries in every field," he said.

Ankara and Doha enjoy strong relations, particularly since the 2017 blockade of the Gulf country by Saudi Arabia and others. The two countries have strengthened military and economic ties in recent years. The seventh meeting of the Turkey-Qatar Supreme Strategic Committee was held in 2021 in the Qatari capital Doha. In the meeting, the two sides signed agreements and memoranda of understanding in various fields, ranging from; endowments and Islamic affairs, media and communication, culture, disaster and emergency management to standardization, small and medium enterprises and investments. Within the framework of the Supreme Strategic Committee meetings, a total of 83 agreements and protocols were signed between the two countries so far.

Turkish-Qatari relations are also witnessing a growing and continuous cooperation at various levels, with high coordination on many regional and international issues, including the Libyan crisis and Afghanistan. In addition to bilateral trade and diplomatic relations, the two countries played a pivotal role in supporting the legitimate Libyan government and defending Tripoli against putschist Gen. Khalifa Haftar's forces in a 14-month offensive. They also cooperated to reopen Kabul Hamid Karzai International Airport after the Taliban took over following the government's fall and the withdrawal of U.S. forces.