Every Armenian resident of Karabakh will have to take a written oath of allegiance to Azerbaijan - Expert
Read: 448

"According to international law, Nagorno-Karabakh and its territory have been and still are a part of the Republic of Azerbaijan" - Putin
Read: 355

Coronavirus is not a flu, it is a dangerous virus, and hygiene and distance must be observed - Zaur Orucov - VIDEO
Read: 347

Russia ‘Open’ to Return of Armenia-Held Land to Azerbaijan - Putin 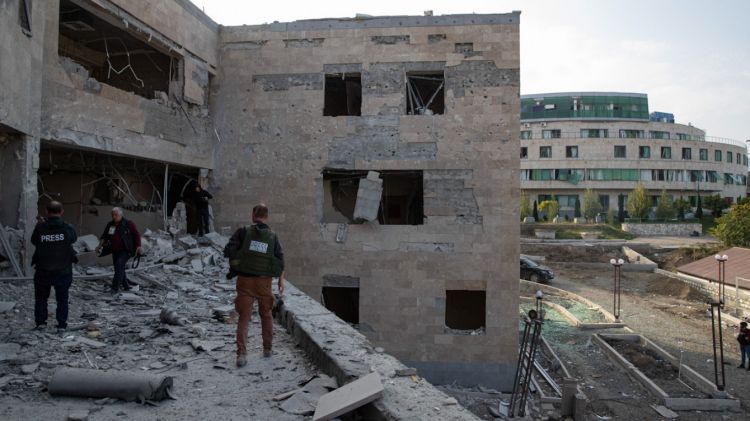 Azerbaijani forces have been making gains against Armenian separatist fighters since the heaviest fighting since a 1994 ceasefire over the South Caucasus region erupted last month. The Armenia-controlled districts surrounding Nagorno-Karabakh, which the international community recognizes as part of Azerbaijan, are key parts of hampered Russian, French and U.S.-led peace talks.

“Our position is absolutely open about the possibility of handing over these five plus two districts to Azerbaijan, alongside the provision of a specific regime for the Karabakh zone and the securing of a connection with Armenia,” Putin said at an investment forum.

“But we need to stop the fighting at the first stage, stop the loss of life and sit at the negotiating table,” he said.

Putin raised the possibility of the transfer following three failed attempts at negotiating a ceasefire, the latest in a U.S.-brokered deal over the weekend.

He spoke as Nagorno-Karabakh president Arayik Harutyunyan warned that Azeri forces were closing in on the unrecognized republic’s second-largest city of Shusha, which would mark a turning point in the month of fighting.

“Whoever controls Shushi controls Artsakh," he said, using the Armenian names for the town and Nagorno-Karabakh.

Putin also accused the Soviet leadership of “inaction” toward the deadly ethnic clashes in Azerbaijan in the late 1980s that he said had led to the separatist war.

“The Armenians took up arms and did it themselves,” he said, adding that the seven surrounding districts fell under the control of Armenian protectorate Nagorno-Karabakh following these clashes.

“Is that good or not?” Putin asked. “You know, everyone has their own truth.”

Azerbaijan and Armenia have been locked in a bitter conflict over Karabakh since Armenian separatists backed by Yerevan seized control of the mountainous province in a 1990s war that left 30,000 people dead.