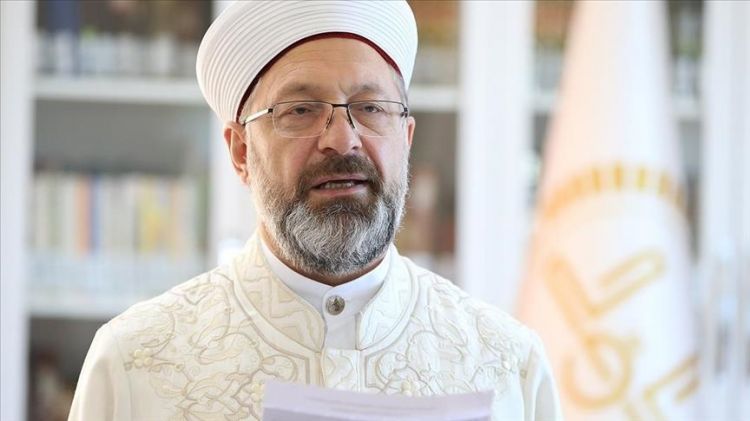 The attempt to seize land where Muslims have lived for centuries and the forceful evictions of Palestinians from their homes are crimes against humanity, the head of Turkey's Religious Affairs Directorate said Tuesday.
Ali Erbas said Israel’s actions are completely unacceptable, sharing the final declaration of a meeting on Al-Aqsa and Jerusalem held by the directorate on the instructions of Turkish President Recep Tayyip Erdogan.
Religious affairs directors or ministers from 60 countries took part in the extraordinary meeting and presented a unified front to the international community, said Erbas.
The declaration said Jerusalem is a Muslim city that bears the memory of the prophets and witnessed humanity's most essential legacy.
"The city of peace where different races, languages, beliefs lived together under the dominance of Muslims for 13 centuries" has become "a land of pain and tears" in the last century due to the policies of "the terror state," it said.
"A ferocious and tyrant community which completely disregards international law, morality, and sacred values" violates the holiness of Jerusalem for other religions as well as its value for humanity, according to the declaration.
'Greatest threat to peace in the region'
It emphasized that the community hindered Muslims' entries and exits to Jerusalem and the public's freedom of worship particularly at Al-Aqsa and the Dome of the Rock.
"We strongly damn, curse, and condemn this inhumane attitude," it said. “With this attitude, the terror state Israel is the greatest obstacle to peace in the region."
"The key to achieving world peace lies in the Middle East, and the key to achieving peace in the Middle East lies in Jerusalem," it said.
"Peace in Jerusalem will be possible with an immediate halt to the occupation as well as restoration of Muslims' religious, historical, and socio-cultural ties with the city," according to the declaration, which urged countries that moved their embassies to Jerusalem to reverse this "grave decision."
It is the duty of all of humanity, including the Jews, Christians, and international community, to defend justice and the law in Jerusalem, it added.
Since the start of the Muslim holy month of Ramadan, Israeli authorities have harassed Palestinian worshippers and attacked worshippers amid prayers inside Al-Aqsa Mosque in addition to threats to force dozens of Palestinian families from their homes in Sheikh Jarrah, East Jerusalem.
Tension spread from East Jerusalem to Gaza after Palestinian resistance groups in Gaza vowed to retaliate for Israeli assaults on Al-Aqsa and Jerusalem’s Sheikh Jarrah neighborhood.
The Israeli army said late Monday that it had launched a military offensive to respond to claims of rocket fire from the Gaza Strip.
As of late Tuesday, Israeli attacks on the Gaza Strip had killed 28 Palestinians, including nine children, and injured 152 others.