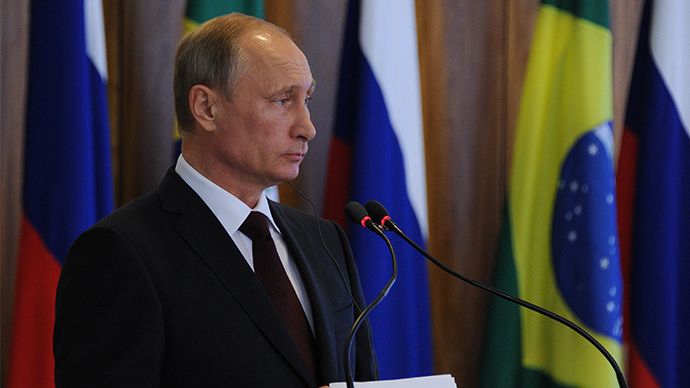 Russia continues expanding economic cooperation with fellow BRICS countries, said President Vladimir Putin at BRICS Summit in Brazil. Russia's trade with Brazil, India, China and South Africa has grown by 22.4 percent, Eurasia Diary reports citing RT.
"We are actively participating in international trade, boosting our mutually beneficial ties with foreign countries — first and foremost, our BRICS partners. In 2018, our trade with the four countries exceeded $125 billion," said the Russian leader.
He also said that Russia is ready to share its experience in digital technologies. "There are good chances for boosting our cooperation in computer science and telecommunications. Russia offers BRICS states to take a closer look at our newest projects. I am talking about electronic document management, search systems and antivirus software, which responds to the highest advanced security requirements."
The Russian president offered to expand energy cooperation, noting: "Russia reliably ensures deliveries of energy materials to global markets and makes a significant contribution to supporting global energy security which is vital for economic growth and social development.”
Putin has earlier called on the trade partners to develop settlements in national currencies, instead of the commonly used currencies like the US dollar. According to him, the integration of payments systems and the establishment of an independent channel on information exchange could facilitate the stability of the banking systems of the five countries.
BRIC was established in 2006 by Brazil, Russia, India and China, before South Africa joined the bloc in 2010, adding the “S” to the acronym.
As of 2018, combined nominal GDP of these five emerging economies amounted to $18.6 trillion, which is about 23 percent of the gross world product. The trade bloc represents more than 40 percent of the world’s population.
According to International Monetary Fund estimates, member states are responsible for more than half of the global economic growth of the last 10 years.