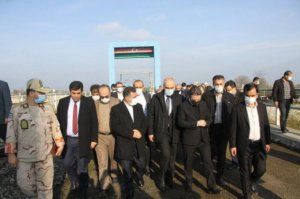 As has been already reported, Azerbaijan and Iran had agreed on the construction of a new road bridge across the Astarachay River. Deputy Minister of Roads and Urban Development of the Islamic Republic Hayrullah Hademi said that the construction of the bridge is carried out in order to increase traffic flows and international transit between the two countries. The four-lane bridge will be 97 metres long.

According to Azeri delegation,  Azerbaijani delegation headed by Deputy Minister of Digital Development and Transport Rahman Hummatov has already visited the Iranian city of Astara to discuss issues related to the transport sector with the Iranian side.

At the meeting with the delegation headed by the Deputy Minister of Roads and Urban Development of Iran Hayrullah Hademi, financial, border, customs and environmental issues related to the 'Memorandum of Understanding on the construction of a road bridge and pedestrian crossing over the Astarachay River on the territory of the state border checkpoints Astara (Azerbaijan Republic) - Astara (Islamic Republic of Iran) from the state border of the Azerbaijan Republic and the Islamic Republic of Iran,' signed by the governments of the two countries.

The Azerbaijani delegation also examined the territory of the bridge under construction and the terminal complex Astara (Iran) and held negotiations to increase the trans-shipment capacity of this complex. An agreement was reached on the need to accelerate the implementation of joint projects.