Turkey to ease COVID-19 restrictions this week on local basis

After months of partial lockdowns, life may return to normal in some provinces as Turkey plans to roll out a 'normalization' process based on the drop in the number of COVID-19 cases 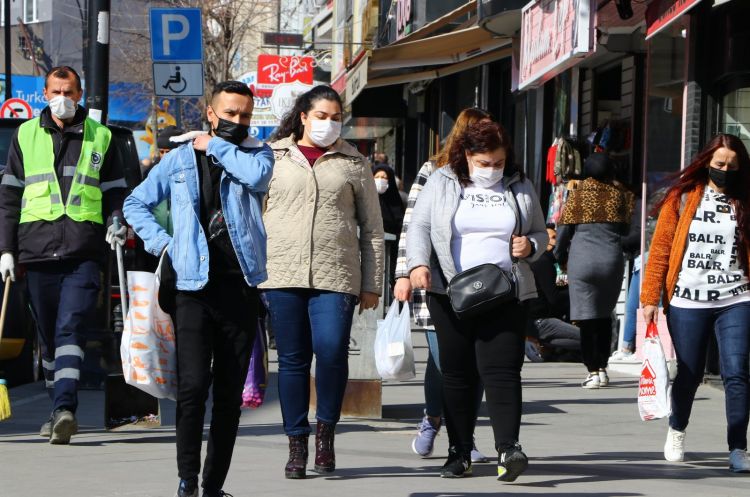 The country started a new week with high hopes, at least for those in provinces with a low number of coronavirus cases. Further details were set to be announced by President Recep Tayyip Erdoğan after a Cabinet meeting later on Monday, but a second “normalization” is expected to start in a few days.
“Normalization” refers to the reopening of businesses closed due to a surge in the outbreak last year, particularly restaurants and cafes, and the lifting of curfews that confined millions in their homes across Turkey. Some basic rules, like mandatory masks and social distancing, will remain in force. However, an end to restrictions will certainly allow for a sigh of relief for people banned from going out after 9 p.m. every day and confined to their homes during the 56-hour lockdown on weekends.
The first “normalization” in June 2020 was relatively successful until the onset of autumn when people started spending more time indoors and returned to big cities from holiday resorts. A rapid rise in the number of cases forced authorities to reintroduce most restrictions.
Like other countries, Turkey faces the dilemma of letting people go out freely and risking a new wave of infections or pushing for extended restrictions and face a growing number of people violating them. Both scenarios will affect the outbreak trends, so the government has sought a third, safer option. This option, announced as “Decision On The Ground” by Health Minister Fahrettin Koca, involves a gradual lifting of restrictions and hands the authority to remove them to local administrations. Public health boards in each province are now tasked with removing or imposing restrictions based on rising and declining case numbers. A color-coded system introduced by the ministry earlier this month will be used as a guide and serves as a warning for citizens ignoring the restrictions.
The Health Ministry recently started publishing two-week figures for each of the 81 provinces, showing the average number of cases per population of 100,000 people. Those scoring lowest will be the first to get rid of curfews and start business reopening, though it won’t be a “sudden” reopening, as authorities point out. Governorates will be able to bring back curfews and other measures if the number of cases spikes again.
Some provinces in the southeastern and eastern regions will likely be the first to “reopen” due to their low number of cases since early February. The capital Ankara is among the big cities with a considerable drop in cases, but media reports say the reopening of businesses and ending curfews will likely start in the second half of March for the capital, as well as Istanbul, which has fared well compared to its history as a COVID-19 hotbed.
Progress in normalization will also depend on vaccinations. The lifting of curfews, in particular, will be subject to assessment based on the number of vaccinations in each province. Vacancy in intensive care units will also be a determining factor in lifting curfews.
For restaurants and cafes, which suffered financial losses due to only being allowed to serve takeaway food, authorities are considering a gradual reopening with measures to protect the health of staff and customers. Those businesses may be ordered to keep a list of each customer to allow health care workers to track potential COVID-19 patients. Bars and nightclubs will be the last places to be reopened, and authorities are planning to reopen those venues in June, and again, based on the trends of the outbreak, the Sabah newspaper reported.
Although the normalization will give a boost to public morale, it is expected that it may also increase the number of daily cases, up to 5,000, in some places. The critical threshold is up to 20,000, which poses a serious burden to the health care system. Nevertheless, by rolling out the process on a provincial basis and gradually, authorities predict there won’t be a major surge in the cases.
Professor Serap Şimşek Yavuz, a member of the Health Ministry’s Coronavirus Scientific Advisory Board, said there will be strict criteria for reopening in every province. “Currently, there are up to 20 provinces fulfilling one of these criteria, that is, infection rate per 100,000 people on weekly basis. These places are safer for reopening. But the decline in cases in those provinces needs to be continuous,” she told Demirören News Agency (DHA) on Sunday. She said that another criterion would be the rate of positive tests. Not everyone who tests positive is hospitalized or experiences a long recovery, but they pose a risk of infection for others.
In Hakkari, the southeastern province with the lowest number of cases – around three per 100,000, according to figures between Feb. 15 and Feb. 21 – restaurants are hoping to reopen for customers after months of working with takeaway services only. The staff has cleaned restaurants and placed tables and chairs back in their places. “We have been closed for three months. We hope to return to the old days,” Fatih Dursun, who runs a restaurant in the province’s Yüksekova district, told Ihlas News Agency (IHA) on Monday. “We are very excited. We washed and cleaned every spot in our restaurant and await news of reopening,” he said.
The country’s most crowded metropolis, Istanbul, may have to wait longer as the number of cases per 100,000 people continues to fluctuate, but restaurant owners say they can reopen with restrictions. “The situation affected us economically. We can reopen by imposing some rules,” Serdar Birkan, a restaurant owner, told IHA. “We can’t bear it anymore. We need income. Previously, we were allowed to open with a limited number of customers and by ensuring distance between them. We also used to check the temperatures of customers and provided sanitizers. If these rules are applied again, we can open our place again,” he said.
“It will be enough for us (to earn a living), even if we are allowed only one person per table,” Adem Odabaş, another restaurant owner, said.