daily news
“Armenia once again demonstrates that it cannot live in peace with its neighbors” - Azerbaijani Presidential aide
Over 1,000 participants of unauthorized rallies detained in Belarus in the past day
'Nuclear powers should once again declare inadmissibility of nuclear war' - Lavrov
Russia’s coronavirus cases surpass 900,000
US Presence in Region Source of Insecurity, Instability - Iran
Russia expects to produce 5 mln doses of COVID-19 vaccine monthly
'She is more than prepared for the job' - Democrats hail Kamala Harris as VP pick
Turkey's defense minister, top military officials to visit Azerbaijan
﻿

Peace, prosperity and stability in Azerbaijan is significant for the true realization of international projects and UN 2030 Agenda - Qaiser Nawab
Read: 1067

The next video conference about "Wonder Woman" at "Azerbaijani Ladies Club - PHOTOS
Read: 604 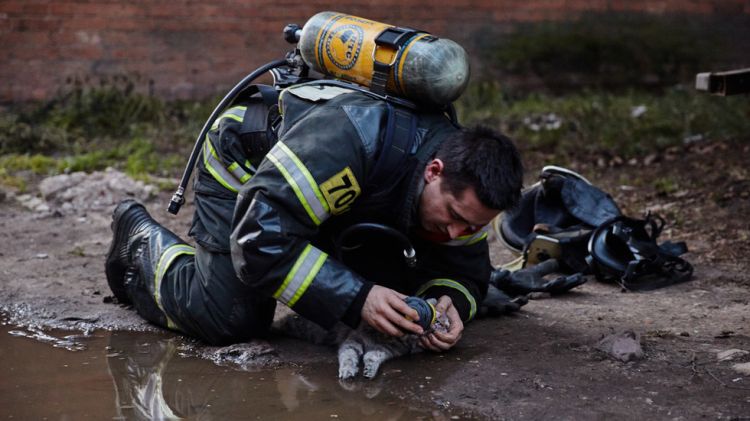 A firefighter in Russia became an instant social media darling after the service released footage of him resuscitating an unresponsive cat, which he had rescued from a terrible fire minutes earlier, Eurasia Diary reports citing Russia Today.

The historic building’s 35 human residents and two pets were rescued earlier this week in Tver, a city some 160km northeast of Moscow. The poor furball was seriously poisoned by smoke by the time firefighters managed to rescue it via an escape route.

Footage shows one of the responders washing the cat’s face with water from a puddle and using his airpack – the breathing apparatus used in heavy smoke – to give some air to the animal.

Luckily, the resuscitation worked and in about seven minutes the cat was conscious again, although exhausted by its ordeal. A photo taken at the scene shows it resting on someone’s sofa.

The firefighter, Andrey Meister, told local media that he and his crew had found the feline right after breaking into an apartment on the third floor of the building in search of survivors. The fire in the historic neighborhood dubbed the “Morozovs’ town” by locals happened on Tuesday.

The city’s emergency services dispatched 19 firetrucks in response to the blaze, and all residents were successfully evacuated without any casualties. The other pet rescued in the operation was a dog.