The loss of the four young men is extremely sad and we share grief of their families – British journalist
Read: 937

What is Turkish position on Eastern Mediterranean? - Turkish Analyst explains 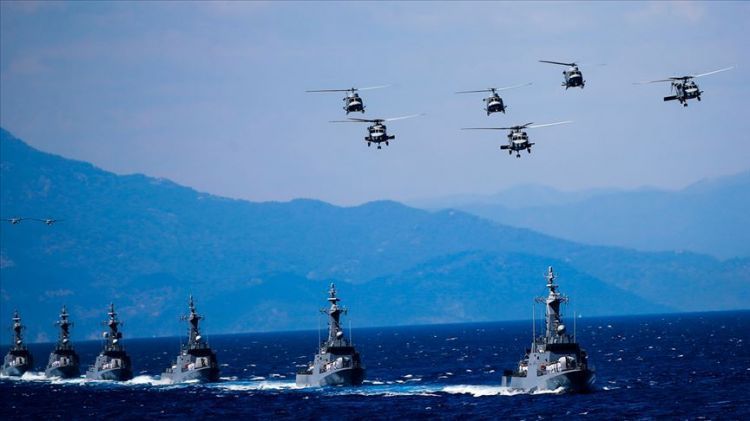 Recently, discovery of energy reserves in the Eastern Mediterranean and participation of Greek Cyprus and other states on the project of exporting energy resources are one of the main topics on the agenda.

Turkey worries about the participation of Cyprus, Israel and Egypt on the exploitation and export of carbon-hydrogen resources in the Eastern Mediterranean and uninvolvement of Turkey and Turkish Cyprus on this project. Uninvolvement of Turkey which has problems with regional countries on the project is the violation of rights of Turks live in the region. That's why the discussions on Cyprus have been causing problems for a long time. Turkish President Recep Tayyib Erdogan threatened the states in the region in his speech during the anniversary of "Peace" movement, his action made the problem to become actual.

Eurasia Diary took special interview from the member of Cyprus Turkish Press Council and journalist Gokhan Guler. We are presenting the content of the interview: "They try to capture the island's natural resources"

- What are the main reasons for the energy problem in Cyprus?

- According to the 1960's constitution, all the material and moral resources of the island have to be distributed among the nations live on the island like Turks and Greeks. Greeks occupied and transformed the Cyprus Republic into unitary state in 1963, they attempt to capture the resources of the island as the same way but using the different method. The main cause of the problem in the Eastern Mediterranean are the treaties about exclusive economic zones signed bilaterally and contrary to the principles of international law between Cyprus and Egypt (2003), Lebonan (2007) and Israel (2011). Because the rights of Turkey and Turkish Cyprus were not paid attention to these treaties. Because of not taking into consideration, they claim that the Republic of Turkey has no rights on discovered natural resources based on conventions.

- What is the position of Turkey on this unfair attitude? - Turkish side (the Republic of Turkey and the Turkish Republic of Northern Cyprus) announced the platform of "mutual discovery", "mutual valuation" and "mutual gaining benefits" when the problem became on the agenda and also announced that this situation will help the problem of the status of the island. Unfortunately, the uncompromising and tense position of Greeks since the negotiations of the case makes obstacles to the solution of the Cyprus problem and the giving result for negotiations.

Turkey states its unrecognition of exclusive economic zones between Cyprus and the companies of US, England, France and Italy, and prohibition of discovery and production of energy resources in the territory controlled by Turkey.

It is not about natural gas, it is about independency

- Is there a role of Eastern Mediterranean problem in the relations of Turkey-EU and Turkey-US?

- Of course, yes. The Greek government wants to put Turkey into a confrontation with US and EU by launching the discovery projects with US "Exxon", France's "Total" and Italia's "Eni" for the aim of resolving the Cyprus problem and the hydrocarbon reserves issue in its favor.

- How much of the gas reserves in the eastern Mediterranean, in particular, the part of Cyprus, caused serious tension in the region?

- Natural gas constitutes 22% of the overall consumption of energy resources. The natural gas reserves in the Eastern Mediterranean claimed to be discovered constitutes 1.5% of global natural gas reserves. Greeks attempt to do everything they can for self-benefiting of carbon-hydrogen resources of the region. The goal is not only the resources but the whole of Cyprus. Greeks plan to deprive Northern Cyprus of independency by capturing resources. The independency of Cyprus is the honor issue for all Turks. Lost of independence of Cyprus and the solution of the Cyprus problem in favor of Greece means the closure of the East Mediterranean to Turkey. If Turkey becomes passive in the Eastern Mediterranean and Aegean, it means that all ships move from Northern Cyprus to Turkey and from Antalya to Turkey have to need the permission of Greece.

Existing approaches can cause war in the region

- I have to ask this from you because your are analyzing the situation so sharply. Can Turkey start a second Cyprus operation if such a danger exists? Can tension turn into war? - There is a possibility that tensions can turn into a hot conflict at a level that can be controlled. There are activities and actions which can lead such conflict. As we stated before, Greece has planned a "game" aims to break Turkey's relations with the US, France and Italy by launching the discovery projects with their companies. After this, they included Egypt and Israel. The Greek Cypriot Administration also came to an agreement with the French military base in contravention of the Treaty of Guarantee and the Treaty of Alliance convention. According to the agreement signed between the Greek Minister of Defence and his French counterpart, France acquired the right to use "Evangelos Florakis" naval base located in Southern Cyprus. This agreement aims to put Turkish troops in a confrontation with French aircraft carrier "Charles de Gaule". According to the agreement, French takes responsibility to defend with ship belonged "Total".

Apart from this, the US stripped off arms sale embargo on Cyprus. Unfortunately, all of this means the violation of the neutrality of the EU and US. But we have to take into consideration that neither EU nor US has international competence such as to make up the final decision or to judge. They have to think that it is impossible to solve the Eastern Mediterranean problem by extortion. Existing approaches can cause war. That's why West shouldn't check out the determination of Turkey in this case.

The whole of the process is in favor of Greece. The Greek Cyprus administration wants to lift a problem for Turkey with the US and EU for protecting its self-interests. I hope that this situation will no lead a war. However, it is known that who stands behind the scene.

Turkey does whatever it can for protecting the rights of itself and Cyprus. Turkey is ready to take serious steps in case of violation of its rights.

Recently, the Turkish Navy conducted "Sea Wolf 2019" massive operation until this day with the participation of 131 ships, 57 aircraft and 33 helicopters in the Black Sea, Aegean and Eastern Mediterranean. "Blue Homeland" and "Sea Wolf" operations are the indicator of determination of Turkey to protect the rights of Turks in the Eastern Mediterranean.

Currently, Turkey has 3 ships in Eastern Mediterranean: "Fateh", "Yavuz" and "Barbaros". As it is known, these names have historical meaning. Fateh (Conqueror) conquered Istanbul, Yavuz conquered Near and the Middle East, and Barbaros Eastern Mediterranean. This is an open message of Turkey for those who plan something against it.

"I am in the seas to protect the rights of the Turks! I am in the south! I'm in the East! In the Eastern Mediterranean, you can not work without taking into account the Turkish Cypriots !!! That is, Turkey does not want war in the region, but  disrespect to its rights can make official Ankara to wage war"

- Is it possible deployment of S-400 on the Eastern Mediterranean taking into consideration of the tensions?

- The official Ankara has already determined where S-400 will be deployed. Recently, the Syrian missile for preventing Israel rockets bombed in Northern Cyprus Turkish Republic.  Taking into consideration this event and the tension in the region, these systems can be deployed in the Eastern Mediterranean. In any case, Turkey will not leave Turkish Cypriots defenseless.