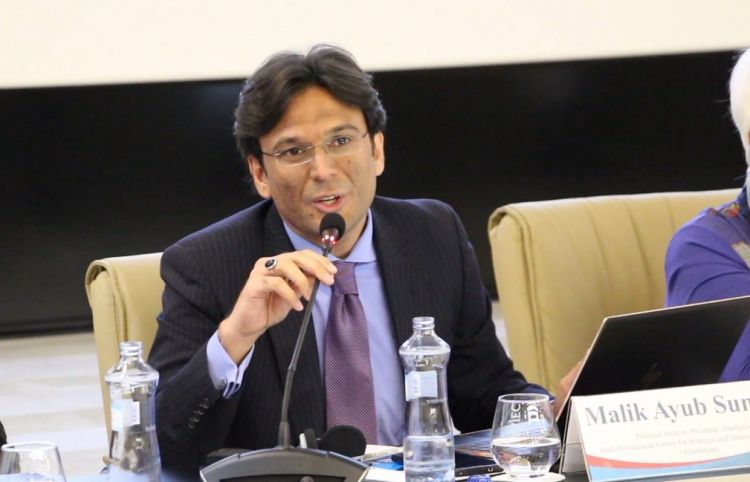 On February 15, President of the Republic of Azerbaijan Ilham Aliyev and Prime Minister of Armenia Nikol Pashinyan took part in public debate in front of the global political elite at the Munich Security Conference. Malik Ayub Sumbal, Founder and President at the Caucasus Center for Strategic and International Studies (CCSIS) gave a special interview about the intense debate between two leaders.
How do you assess the Public Debate between Ilham Aliyev and Nikol Pashinyan in Munich?
I listened to the debate of both the leaders very carefully. The body language of Azerbaijan President Ilham Aliyev is much more confident as compared to Armenian Prime Minister Nikol Pashinyan, who has a language barrier and may not well describe or present what he wants to say.
Ilham Aliyev mentioned very strong historical references that are based on very solid and substantial evidence. In his statement he clearly said that Nagorno-Karabakh (Upper-Garabagh) is the part of Azerbaijan and it is as a legal entity. He also mentioned Shaumyan who was a bolshevik and killed innocent Azerbaijanis.
Azerbaijan President asked more international pressure on Armenia to follow the UN resolutions and the most important is the OSCE Minks group co-chair efforts that clearly say that Nagorno-Karabakh is not Armenia. In that resolution it says Nagorno-Karabakh is not an independent country and one recognized it.
Is it possible to say that President Aliyev has taught a lesson of history and politics to Armenian PM?
I think President Ilham Aliyev exposed Armenian Prime Minister Mr. Pashinyan on an international security forum and this is a great victory for Azerbaijan to tell the world that Nagorno-Karabakh belongs to Azerbaijan and Armenia is an occupant.
How long will Pashinyan be able to keep the status quo unchanged, given the lack of sound arguments on the Nagorno-Karabakh conflict?
It would be getting more difficult for Armenia to keep this status quo for further long because now it is the digital information age and people are getting the truth and objective information from different sources.
I think Armenian Prime Minster will face immense pressure back at home. Mr. Pashinyan shamefully failed to defend the Armenian stance of the illegal occupation of Nagorno-Karabakh. His counter-narrative of Azerbaijan President Ilham Aliyev's debate is not logical and hard to believe for someone who has the objective mind.
Armenian politics is based on Anti Azerbaijan rhetoric and hate so his popularity level may fall in his own country.