Demarcation and delimitation of borders between Azerbaijan and Armenia is coming to end soon - Azerbaijani official
Read: 297

Baku would be a relevant venue for Biden-Putin talks - Expert
Read: 238

Azerbaijan continues to be one of biggest investors in Georgia’s economy - Ilham Aliyev
Read: 200 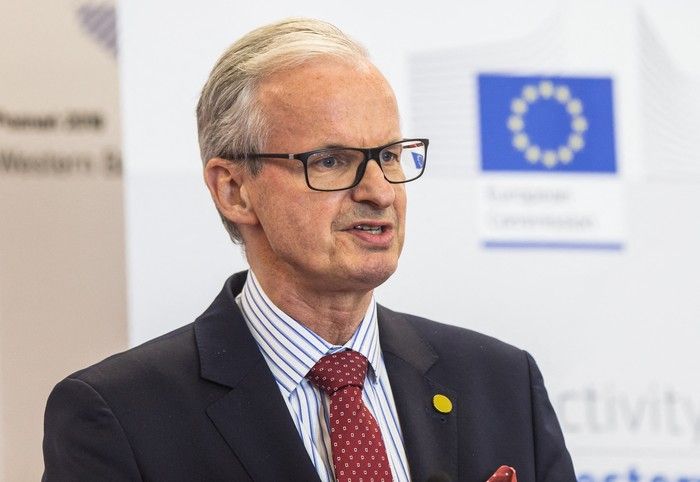 On 31 March, the ruling Georgian Dream (GD) party and the opposition failed to come to an agreement in EU-mediated talks for the second time after the EU mediator Christian Danielsson’s document which concerned ambitious electoral and judicial reforms and offered amnesty for suspects and convicts of the June 2019 protests in Tbilisi was not signed.

“Sadly, I must note that there was not that willingness today around the table to reach such a compromise. I will now report to President Michel on the developments of this week, and it will naturally be up to him to decide on the next steps and timing of such steps. I will end with the word to all of Georgia’s citizens. I know your level of expectation and I fully share your frustration, but I also welcome all efforts throughout the process. NGOs made some really useful proposals, and the media kept a high level of scrutiny throughout the process holding the political leaders accountable. As I return to Brussels, I will take back with me this confidence that such a vibrant civil society Georgia will one day manage to turn the page and head for an ambitious future. And, of course, the European Union will remain ready to support Georgia’s every step on the way,” Danielsson said.

Danielsson’s document was afterwards made public. The document addressed the issues of 1) politicised justice; 2) electoral reforms; 3) judicial reforms; 4) power sharing in the parliament; and 5) the future elections in the country. In regard to the first issue, Danielsson proposed that within one week of signature of the agreement, a party represented in Parliament shall initiate an amnesty law for all violations and convictions stemming from the 19-21 June 2019 protests. In terms of election reforms, the document called for proportional elections with a threshold between natural and 2%; the Central Election Commission (CEC) chair would be elected by two-thirds majority of the Members of Parliament; the creation of a special task force which would review  the dispute resolution process and provide timely recommendations to the CEC; as well as the reconsideration on the laws on party registration and on party financing.

In terms of judicial reforms, the document called for an inclusive and cross-party reform process. The Georgian authorities were called to implement the two judicial reform packages from 2017 and 2019; further enhance transparency and merit-based selections in the appointment of judges to first instance and appeal courts, notably by publishing written justifications for appointments of judges with reference to integrity and competence criteria; submit to the Parliament draft legislation on the appointments to the Supreme Court; and  refrain from making appointments to the Supreme Court under existing rules. Georgia’s next Prosecutor General should also be appointed through a vote of a qualified majority of the Members of Parliament, ensuring the broadest, cross-party political support.

In the two final sections of the document, the parties in Georgia were called to acknowledge their differing assessment of the 2020 elections and agree to take up their parliamentary mandates and participate in future elections on the basis of electoral reform. Also, the opposition parliamentarians would receive 5 parliamentary committee chairmanships, of which two should be in the Committee on Procedural Issues and Rules, Committee on Legal Issues, Human Rights Committee, Budget and Finance Committee  or the Foreign Relations Committee. In addition, the opposition representatives would get one chairmanship either Euronest Parliamentary Assembly (PA), EU-Georgia Parliamentary Association Committee, PA of the Council of Europe or the OSCE PA. The Georgian parties would also establish a Jean Monnet Dialogue with the European Parliament.

The GD chairman Irakli Kobakhidze said that the opposition had closed the dialogue using a non-constructive approach and ultimatums to destroy all resources to reach an agreement. He emphasised that the opposition parties set two ultimatums regarding the case of the Mtavari Arkhi owner Giorgi Rurua and the issue of early elections, which according to Kobakhidze lost sense of a dialogue. Kobakhidze also stated that the document by Danielsson included GD’s proposal on Nika Melia’s case. “In particular, in case of paying bail, Georgian Dream pledged to ensure application of the amnesty bill in the 20 June case. However, the opposition rejected this solution,” he added.

However, Kobakhidze assured that the “artificial crisis” in the country would be addressed. “Artificial crisis is also a crisis that needs to be solved. Naturally, we will spare no effort to do so. We will have close cooperation with international partners and try to deal with some opposition parties. It can be individual or joint communication. Let’s see! We will have a try and a constructive approach to all issues,” he added.

Salome Samadashvili from the opposition United National Movement party (UNM) said that the opposition agreed to three points in the document and proposed compromise options to the government on the political prisoners and election issues. “Unfortunately, our country and our state have lost another historic opportunity to pave the way for our country’s future in the EU and NATO through an agreement between the political parties. We failed to do what our strategic allies expected,” she said.

Giga Bokeria from European Georgia (EG) also emphasised that the issues of Melia-Rurua and early elections were the reasons for rejecting the proposal. “The Georgian Dream did not sign the published document. The document does not say anything about the elections at all and is therefore unacceptable for us. It is our responsibility to reach an agreement that will bring the country out of the crisis. This situation is disastrous for us and for them as well,” he added.

“I think the mediator understands very well that the country needs a reshuffle and understands very well that the democratic way to reshuffle the country is to hold early elections or a plebiscite for our citizens to decide whether they need early elections. I think this issue is postponed towards the end of negotiations because the first three issues are a big document,” said Lelo leader Mamuka Khazaradze. He also added that the Georgian Dream’s position surprised him. “I could not find a specific answer, whether they (GD) agree with the document or not. I have an impression GD disagrees but wants to blame the opposition,” he stressed.

Georgia’s former Prime Minister Giorgi Gakharia also gave a statement after the second round of negotiations failed. “Yesterday showed us once again that radicalism and radical positions are still adverse factors that hinder the building of the modern Georgian state,” he wrote on Facebook. “State-building is a long and challenging process, and each of us has a responsibility to contribute to that process,” he added.