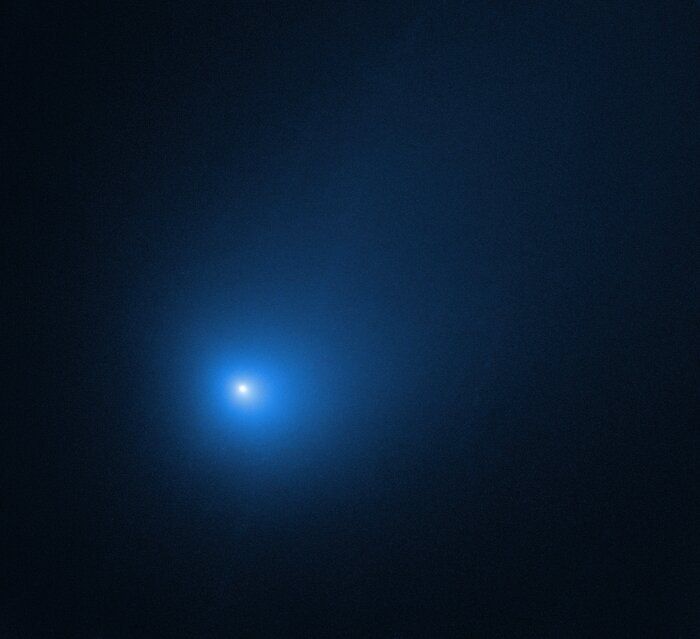 Comet 2I/Borisov has become something of a cosmic celebrity in recent months, and researchers have been collecting snapshots with paparazzi passion. These new pics are the most revealing yet, taken as the interstellar visitor makes its closest approach to Earth, Eurasia Diary reports citing Science Alert.

The newly released images from the NASA/ESA Hubble Space Telescope were taken from a distance of just under 300 million kilometres, providing astronomers with unprecedented detail of the odd little comet.

And we do mean little. It seems to be 15 times smaller than first predicted.

"Hubble gives us the best measure of the size of comet Borisov's nucleus, which is the really important part of the comet," says astronomer David Jewitt from the University of California Los Angeles.

"The radius is smaller than half a kilometre. This is important because knowing the size helps us to determine the total number, and mass, of such objects in the Solar System, and in the Milky Way."

That list is currently a short one. Just one other object – an asteroid with the jaw-breaking name Oumuamua – has been confirmed as an interstellar traveller.

Back in August, Crimean amateur astronomer Gennadiy Borisov observed a previously unlisted comet heading our way, out at a distance of around twice that of Mars's orbit.

After doing the sums on its trajectory, it quickly became clear that the ball of rock and ice couldn't have come from the frozen wastes at the edge of our own Solar System, where other comets originate. It had to come from further afield, flying towards the Sun at an insane speed of around 175,000 kilometres per hour.

Finding two alien objects in two years is either a huge stroke of luck, or an indication that if we look hard enough, we'll almost certainly find more like them. The question is, just how many should we expect?

"Borisov is the first known interstellar comet, and we would like to know how many others there are," says Jewitt.

The comet's nucleus is too small to be resolved from 298 million kilometres away, a relatively close distance that currently puts it somewhere just inside the asteroid belt.

But as you can see in the picture below, it still puts on quite a display. These most recent images are nothing short of stunning, revealing a fog of gas and dust as the nucleus, long frozen in the wilderness between stars, now slowly defrosts in the Sun's warmth.

Earlier, Hubble caught the comet with a cheeky photobomb by the spiral galaxy 2MASX J10500165-0152029. You can see that pic up top left, with the galaxy's bright central core smeared slightly as Hubble tracks Borisov across the sky.

With the visitor putting distance between it and our planet later this month, these images are about as good as it's going to get for 2I/Borisov.

Hopefully we won't have to wait too long before we see another one just like it heading our way. By then, we'll be sure to have our cameras ready.