Khojaly genocide is commemorated in Azerbaijan - Tragedy of century
Read: 552

Nikol Pashinyan will be forced to flee - the expert does not consider the decision of the General Staff spontaneous
Read: 479

Earth's atmosphere had terrifying Mercury pollution even before the killer asteroid 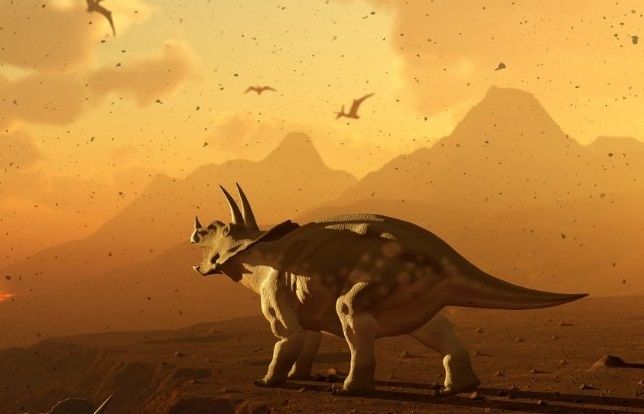 The fresh evidence serves up even more contention in a "long-running and bitter" debate over how the dinosaurs died all those years ago. While some scientists blame their demise solely on the notorious asteroid that hurtled into our planet, others maintain there's more to the story.

Violent volcanic eruptions began at least tens of thousands of years before the asteroid impact, and it's thought all that lava could have exacerbated the impact of the cataclysmic event that claimed three-quarters of all life on Earth.

Examining ancient fossilised bivalves from around the world, scientists have now pinned a global increase in mercury and carbon dioxide on a series of long-lived eruptions that formed the feature now known as the Deccan Traps. These events lasted for nearly a million years and formed much of western India during the Cretaceous-Paleogene mass extinction.

"For the first time, we can provide insights into the distinct climatic and environmental impacts of Deccan Traps volcanism by analysing a single material," says environmental scientist Kyle Meyer, who conducted the research at the University of Michigan.

Mercury is a toxic trace chemical, and volcanic eruptions are the largest producer of it here on Earth. When this element makes its way into the ocean, it becomes highly reactive with organic matter and is readily taken up by phytoplankton, which mollusks then eat.

Using their shells as an indicator of water quality and temperature, scientists now think the Deccan Traps eruptions had profound, long-lasting and global climatic and ecological impacts.

"Mercury anomalies had been documented in sediments but never before in shells," says geochemist Sierra Petersen from the University of Michigan.

"Having the ability to reconstruct both climate and a volcanism indicator in the exact same materials helps us circumvent lots of problems related to relative dating."

Sediment records, for example, are limited because they have not yet linked mercury emissions to global climate changes; the new study was able to do just that.

Similar to previous results, their findings indicate an abrupt warming event took place about 250 thousand years before this mass extinction. What's more, this coincides with a surge in mercury levels sometime between 68 and 70 million years ago, when volcanic activity was so intense it created a carpet of lava 100 (328 feet) metres thick.

The authors say this is "highly suggestive that this climate forcing was driven by the emission of volcanic CO2", and incidentally, this time period matches up with a decrease in species richness and clustered extinctions of foraminifera.

Comparing this ancient data to a highly polluted mercury site in the United States, where fish can no longer be eaten, the researchers were shocked by the similarities.

"It was incredibly surprising to see that the exact same samples where marine temperatures showed an abrupt warming signal also exhibited the highest mercury concentrations, and that these concentrations were of similar magnitude to a site of significant modern industrial mercury contamination," says Meyer, who now works at the Portland State University.

It's still too early to say for sure if these mercury levels poisoned the dinosaurs, but as a proof of concept, the study is highly valuable.

Further analysis on marine life will be needed to confirm the results, but it certainly seems as though fossilised marine life can provide unique insights into mass extinctions and climatic changes of the past.

This study was published in Nature Communications.