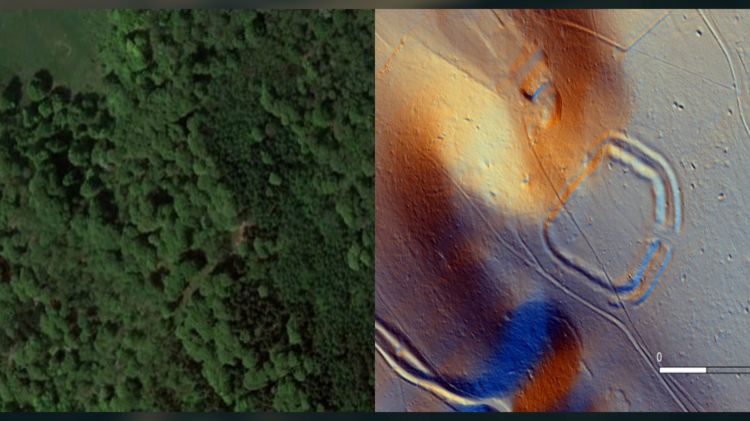 This rolling landscape, a chalk escarpment lying approximately 30 kilometers northwest of London and overlooking the wide expanse of the valley beneath, is an archaeologists' paradise. There are more Iron Age hill-forts concealed in woods and hilltops in this area than anywhere else in southern England.

In one of the biggest surveys of its kind in the UK, a team from Beacons of the Past scanned 1,400 square kilometers of the Chilterns in precise detail, using the latest laser technology.

"We fly a thing called LIDAR, which is essentially hitting the ground with millions and millions of laser shots and each one of those laser points creates a very, very accurate measurement," says Wendy Morrison, the archaeologist leading the project. "So we're able to create a three-dimensional model of the earth."

These LIDAR images can penetrate trees and other obstacles, revealing clearly defined lines hidden below. By analysing the scans in detail, Beacons of the Past discovered a previously unknown Iron Age hill fort last year and is learning ever more about how people once lived thousands of years ago.

"One of the most fantastic things about the LIDAR results is that it's not only shown us prehistoric monuments, but it's shown us all sorts of archaeology that we suspected might be there, but not in the kind of densities that we're seeing," says Morrison.

The new data also shows Roman farm systems, indicating there was more life in the area during that era than once thought.

Morrison explains how LIDAR revealed "hundreds and hundreds of arable fields and Roman settlements, which means that this place was just filled with people during that time." Archaeologists believe this activity is a clear sign that people were attracted to an area rich in natural resources.

The team has created a database of the new imagery online, which anyone can register to access – whether an amateur archaeologist, or a schoolchild curious about the past.

"Up to now we've got over 6,000 volunteers that are logging on, doing archaeology from the comfort of their home, at a time when we can't really go out in the field and do things," says Morrison.

"I do love this stuff and to be able to get everybody from schoolchildren, when we're able to do assemblies at schools, right the way through to retired people and get them all energized and enthused about the past as I am, that's just an absolute gift."

The number of budding online archaeologists has tripled during lockdown. For now, they are confined to virtual exploration online, but the team hopes to offer field analysis sessions once restrictions ease. Archaeologists believe there is plenty more to discover within their vast database of imagery.

The Beacons of the Past is funded by the UK's National Lottery Heritage Fund and supported by the Chilterns Conservation Board.