For the first time, scientists have detected X-rays being emitted by the planet Uranus. The discovery was made by a new analysis of data from NASA’s Chandra X-ray Observatory.
Many objects in space emit X-rays, including black holes, neutron stars, a special class of binary stars known as X-ray binaries, exploding stars called supernovae and their remnants, and our own sun. Most of the planets in our solar system, and even some of Jupiter’s moons are also known to give off X-rays. But, until now, when astronomers looked for X-rays from the ice giant worlds Uranus and Neptune, they found nothing – nada – zilch. Now, for the first time, astronomers have used NASA’s Chandra X-ray Observatory to detect X-rays coming from one of the ice giants, Uranus, in the outer solar system.
The space agency made the announcement on March 31, 2021, and the researchers published their discovery in the April 2021 issue of the the peer-reviewed Journal of Geophysical Research. 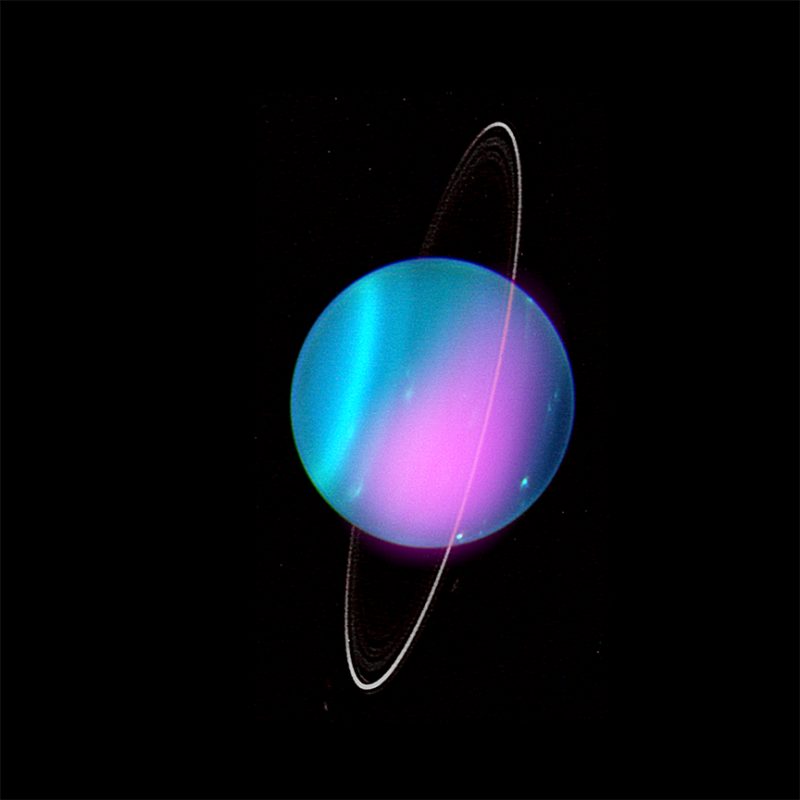 The planet Uranus is surrounded by thin rings. This world rotates on its side with respect to the plane of our solar system. This composite image is composed of both X-ray and visible light images. The X-ray emission appears here as pink, and the visible light as blue. Image via NASA/ Chandra X-ray Observatory.
While X-ray emissions were known to be common among objects in the solar system, Uranus and Neptune had still been little studied in this regard, so not much was known about whether they also emitted X-rays. The researchers, led by William Dunn at University College London in the U.K., decided to take a closer look at data about Uranus from Chandra. One set of observations was from 2002 and the other was from 2017.
They saw a prominent detection from the first observation, and a possible one from the second.
One surprise is that there seems to be evidence for more than one source of the X-rays. It had been assumed that they would be the result of scattering, where X-rays from the sun are scattered by Uranus’ atmosphere. The same kind of thing happens in Earth’s atmosphere. But there may be another, still unknown source of X-rays on Uranus.
One possibility is that they are produced by auroras in the planet’s atmosphere – caused by charged particles that interact with gas particles in the atmosphere, setting off spectacular bursts of light – which have been seen before by the Voyager 2 spacecraft and the Hubble Space Telescope. Or, they could even be produced by Uranus’ rings. The region of space around Uranus contains charged particles such as electrons and protons. They could collide with particles in the rings, creating X-rays. Saturn’s rings are known to produce X-rays when they are hit by charged particles from the sun, so perhaps the same thing is happening at Uranus, even though the planet only has two sets of thinner rings, not nearly as prominent as Saturn’s.
Scientists are particularly interested in Uranus’ X-rays since the planet itself is so unusual. Unlike all the other planets in the solar system, the rotation axis of Uranus is tilted at 98 degrees, almost perpendicular to its orbital path around the sun. In other words, it rotates on its side. The planet’s magnetic field, however, is tilted at 59 degrees and is also offset from the center of the planet. Scientists think this may cause auroras that are uniquely complex and variable, which may contribute to the production of X-rays.
Right now, scientists still aren’t sure what causes Uranus’ auroras. If it can be confirmed that they do, in fact, contribute to the planet’s X-ray emissions, that could provide valuable clues as to how the auroras themselves are produced.
Auroras are also common on other planets in the solar system, including, of course, Earth. On our planet, X-rays occur in auroras when energetic electrons travel down the magnetic field lines to the poles.
Researchers want to continue observing Uranus with Chandra, to help narrow down the locations of the X-rays and identify their sources. From the paper:
Further, and longer, observations with Chandra would help to produce a map of X-ray emission across Uranus and to identify, with better signal-to-noise, the source locations for the X-rays, constraining possible contributions from the rings and aurora. Such longer timescale observations would also permit exploration of whether the emissions vary in phase with rotation, potentially suggestive of auroral emissions rotating in and out of view. 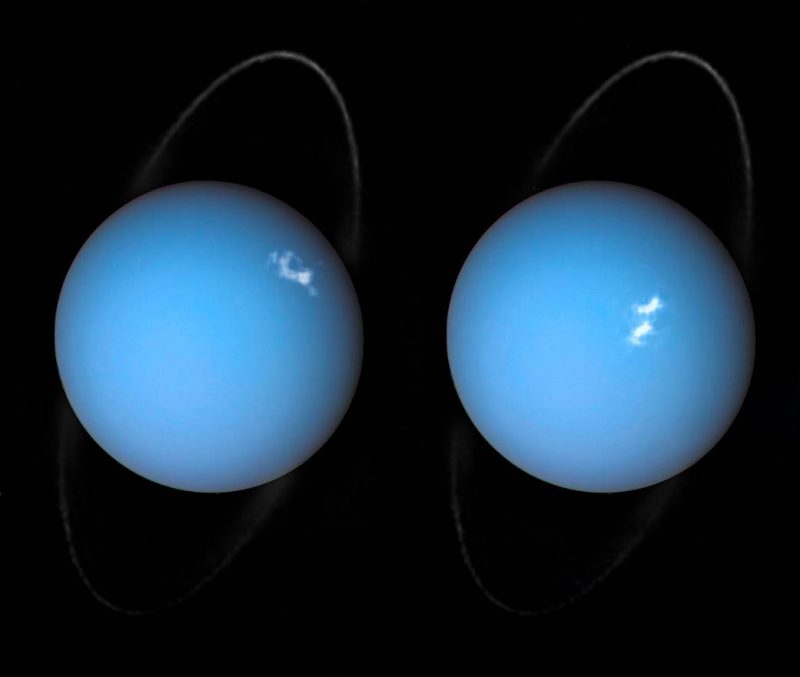 Other upcoming missions that could study Uranus’ X-rays include the European Space Agency’s Advanced Telescope for High Energy Astrophysics (ATHENA), due to launch in 2031, and NASA’s Lynx X-ray Observatory mission, which is still in the concept stage.
Figuring out exactly what causes Uranus’ X-rays could help researchers better understand this enigmatic world. If X-rays were to be discovered on Neptune as well, as seemingly likely, it would also be interesting to compare their nature on each of these ice giant worlds.