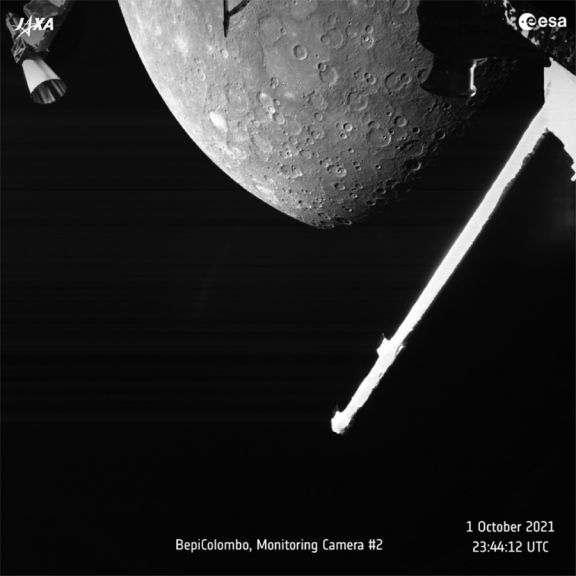 A joint European-Japanese spacecraft got its first glimpse of Mercury as it swung by the solar system’s innermost planet while on a mission to deliver two probes into orbit in 2025.
The BepiColombo mission made the first of six flybys of Mercury at 11:34 p.m. GMT Friday, using the planet’s gravity to slow the spacecraft down.
After swooping past Mercury at altitudes of under 125 miles, the spacecraft took a low-resolution black-and-white photo with one of its monitoring cameras before zipping off again.
The European Space Agency said the image shows the Northern Hemisphere and Mercury’s characteristic pock-marked features, among them the 103-mile-wide Lermontov crater.
The joint mission by the European agency and the Japan Aerospace Exploration Agency was launched in 2018, flying once past Earth and twice past Venus on its journey to the solar system’s smallest planet.
Five further flybys are needed before BepiColombo is sufficiently slowed down to release ESA’s Mercury Planetary Orbiter and JAXA’s Mercury Magnetospheric Orbiter. The two probes will study Mercury’s core and processes on its surface, as well as its magnetic sphere.