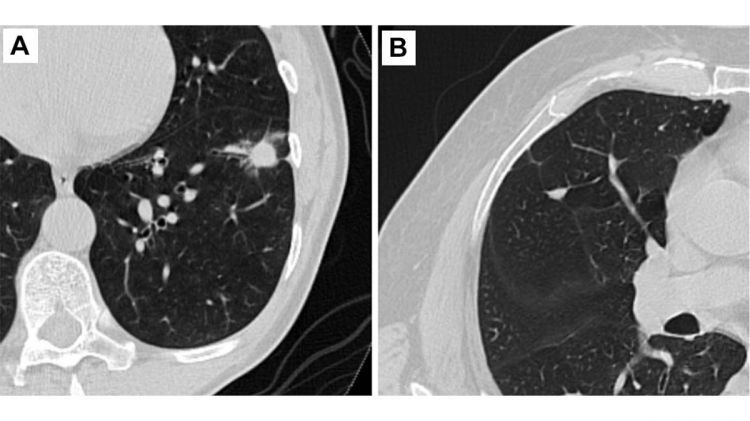 As artificial intelligence and machine learning technologies continue to be developed, they may become powerful tools in many fields, including that of medicine.
AI, complementing human experience and judgement, has already shown promise as a prognostic tool. Recent research using an AI program to help identify, from the results of chest scans, the risk of lung cancer is an example of the technique in action.
Lung cancer is the second most common form of cancer worldwide, according to the World Cancer Research Fund. In Australia, it is the leading cause of cancer deaths and Cancer Australia estimates lung cancer accounted for 17.7% of all deaths from cancer in 2021.
Computed tomography (CT) scans are a type of three-dimensional imaging often used in cancer screening and diagnosis. In chest CT scans, small abnormal areas, called lung nodules, are sometimes found. Most lung nodules seen in the scans are not cancer but some may be at risk of developing into cancerous growths. A key part of cancer screening is determining from chest scans how likely it is for cancer to develop from lung nodules.
The study’s senior author, Anil Vachani, director of clinical research in the section of Interventional Pulmonology and Thoracic Oncology at the Perelman School of Medicine, University of Pennsylvania in Philadelphia, US, says CT scans are more in favour than X-rays for chest imaging.
“A nodule would appear on somewhere between 5% to 8% of chest X-rays. Chest CT is such a sensitive test you’ll see a small nodule in upwards of a third to a half of cases. We’ve gone from a problem that was relatively uncommon to one that affects 1.6 million people in the U.S. every year,” Vachani says.
Vachani’s team used the AI diagnosis tool developed by Optellum Ltd., based in Oxford, UK, to assist clinicians in assessing pulmonary nodules found from CT scans. The AI, they argue, can go deeper than the basic aspects of a nodule, such as size and border characteristics.
“AI can go through very large datasets to come up with unique patterns that can’t be seen through the naked eye and end up being predictive of malignancy,” Vachani says.
The researchers gave six pulmonologists and six radiologists CT imaging data from 300 scans of indeterminant lung nodules – those between 5 and 30 millimetres in diameter – to estimate the malignancy risk. The experts were also asked to make management recommendations such as CT checks or further diagnostic procedures. They were asked to do this with and without the aid of the AI tool.
Analysis of the experts’ responses showed that the AI tool improved nodule malignancy risk estimation, and agreement between the physicians, on both risk stratification and patient management strategies.
“The readers judge malignant or benign with a reasonable level of accuracy based on imaging itself, but when you combine their clinical interpretation with the AI algorithm, the accuracy level improves significantly,” says Vachani.
“The level of improvement suggests that this tool has the potential to change how we judge cancer versus benign and hopefully improve how we manage patients.”
The study is another step forward in the use of artificial intelligence in medicine. But more research is needed before the tool can be used to assess real patients in the clinic, says Vachani.
“We’ve taken the first step here and shown that decision making is better if the AI tool is incorporated into radiology or pulmonology practice,” he says.  “The next step is to take the tool and do some prospective trials where physicians use the AI tool in a real-world setting. We are in the process of designing those trials.”