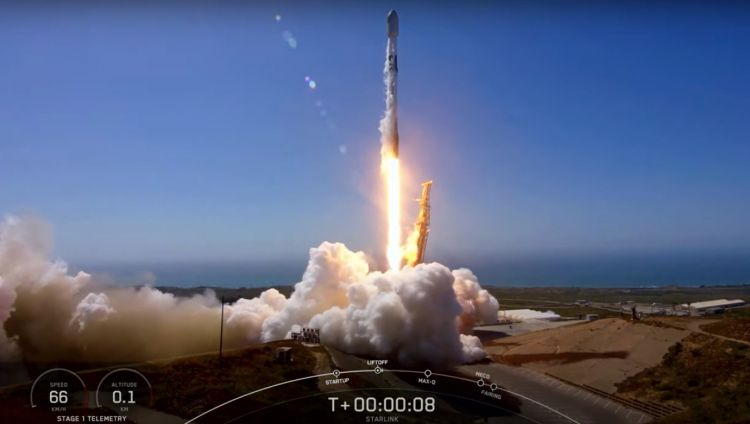 SpaceX will launch one of its Falcon 9 rockets for a record-tying 13th time on Sunday morning (July 17), and you can watch it live.
A Falcon 9 carrying 53 of SpaceX's Starlink internet satellites is scheduled to lift off at 10:20 a.m. EDT (1420 GMT) on Sunday from Cape Canaveral Space Force Station in Florida. Watch it here at Space.com, courtesy of SpaceX, or directly via the company(opens in new tab). Coverage will begin about 5 minutes before liftoff.
It will be the 13th launch for this Falcon 9's first stage, tying a rocket reuse record that SpaceX set last month and matched just 10 days ago. The booster flying Sunday also helped loft SpaceX's Demo-2 crewed test flight to the International Space Station, the RADARSAT Constellation Mission, the SXM-7 communications satellite and nine Starlink missions, SpaceX representatives said in a mission description(opens in new tab).
And this booster will probably fly yet again, if all goes according to plan. A little less than nine minutes after liftoff, it will come down for a vertical landing on the SpaceX droneship Just Read the Instructions, which will be stationed in the Atlantic Ocean off the Florida coast.
The 53 Starlink satellites are scheduled to be deployed from the Falcon 9's upper stage about seven minutes later, at 15.5 minutes after liftoff.
Sunday's flight continues a very busy 2022 for SpaceX. The company has already launched 30 Falcon 9 missions this year, 17 of them dedicated Starlink flights.
Starlink is SpaceX's huge constellation of broadband satellites. The company has launched more than 2,800 Starlink spacecraft to low Earth orbit to date, and many more will likely go up in the not-too-distant future: SpaceX has permission to loft 12,000 Starlink satellites, and it has applied for approval to launch 30,000 additional spacecraft on top of that.