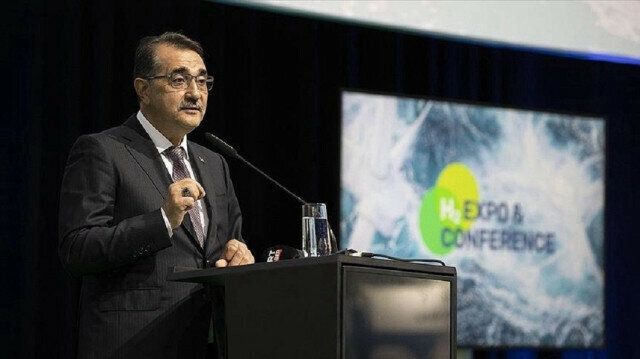 Türkiye aims to become a new production and innovation center in the wind energy sector for the local region and Europe, the Minister of Energy and Natural Resources Fatih Donmez said on Tuesday in Hamburg.
During his speech at the WindEnergy Hamburg Conference and Fair, Donmez showcased the country’s place in wind energy as Europe's fifth largest wind equipment manufacturer and the European leader in blade and tower production.
"Today, Türkiye has become Europe's reliable partner and equipment supplier, not only in natural gas supply security but also in wind and other renewable energy fields," Donmez said.
As Türkiye is ahead of its competitors in many areas in the wind sector, Donmez explained that the country aims to become a new wind production and innovation center for Europe and the region.
He said that the country exported approximately €1.5 billion of wind turbines and equipment to nearly 50 countries in 2021, and added that "70-80% of the turnover of our companies consists of export revenues. Türkiye can locally manufacture about 70% of its wind turbines and related components."
- Türkiye ranks 12th in global wind-installed energy
The country ranks fifth in Europe and 12th in the world in renewable energy installed capacity and seventh in Europe and 12th in the world in wind energy installed power.
"Türkiye is well above the world average in electricity generation from renewable resources at a rate of 46%, as the share of renewable resources in global electricity production is 28%," Donmez said.
With 12 gigawatts of offshore power plants and 57 gigawatts of offshore potential, the country aims to increase developments in turbine technology.
Taking developing technologies, a growing economy and an increasing population into account, Türkiye has the potential to have an installed onshore capacity of over 100,000 megawatts, while offering attractive opportunities for investors in wind and the renewables sectors.