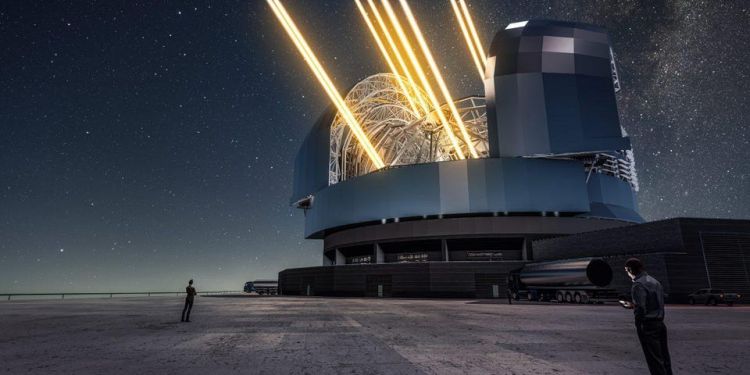 When stars are born, more times than not, they arrive into the universe as twins. In the first step of stellar creation, a large cloud of gas and dust collapses due to gravity, often fragmenting into pieces. If each piece collapses again, multiple stars will be birthed from the same gas cloud. These infant suns are then surrounded by a halo of matter, the precursor to planets, known as a planet-forming disk. And, if these stars are close enough, the planet-forming disks around them can even swirl together, creating fantastic spiral tails.

New astronomical images published in the Monthly Notices of the Royal Astronomical Society on November 28 reveal three such interacting twin planetary disks in stunning detail. The team took these photos using the European Southern Observatory’s Very Large Telescope in Chile. Although this is not the first time these disks have been imaged, advances in astronomical technology offer a new, more comprehensive vantage of the dramatic cosmic scene.
The stars are all in the Milky Way, fairly nearby by galactic standards. Astronomers photographed these three sets of known twins in polarized light, which can help untangle the dust from each disk. Certain telescope technologies, like those used in this study, can record the specific direction, or polarization, of incoming light waves. Polarized light is a great trick for finding faint structures such as the dusty disks around bright stars. Stars aren’t expected to emit this kind of light, but starlight scattered off dust will become polarized, making the disks and their spirals easier to see.
Polarization is also a powerful tool for astronomers—it encodes a lot of information about how the light made its way to our telescopes. As a star’s light zooms through space, if it hits small bits of dust, it will bounce off those particles in specific ways. The polarization of that light results from the precise angle of its bounce and what type of matter it hits. “There are loads of intricate processes involved,” says Universidad de Santiago de Chile astronomer Sebastián Perez, a co-author of the new study. The research team used the information provided by polarization to trace which star illuminated each part of the disks, helping them to understand the geometry of the systems.

Their goal is to understand how neighboring stars influence the planet-forming disks. “A large fraction of stars probably go through such a phase,” Perez says, referring to their sibling-filled childhood, “but we know little about it.” Nearby sibling stars can orbit each other, or one star can drop by for a visit to another, known as a fly-by. These new images are a first step toward determining which scenario happened for each of the three systems.

“We expect that most stars form in dense regions of the galaxy and are surrounded by other stars forming at almost the same time,” says Philipp Weber, astronomer at Universidad de Santiago de Chile and lead author of the study. Despite this fact, astronomers “mainly treat protoplanetary discs as isolated systems.”

Their new observations suggest that, for many star systems, this is a bad assumption to make. Fly-bys “could have lasting effects” on the structure of these planet-forming disks, says Weber, who still has a number of outstanding questions. How common are fly-bys? How do sibling stars change the evolution of disks and their planets? These new data will no doubt keep astronomers busy refining their theories as they seek to understand how planets form.