In memory of Algimantas Liekis - author of a book on the Nagorno-Karabakh conflict | Eurasia Diary - ednews.net 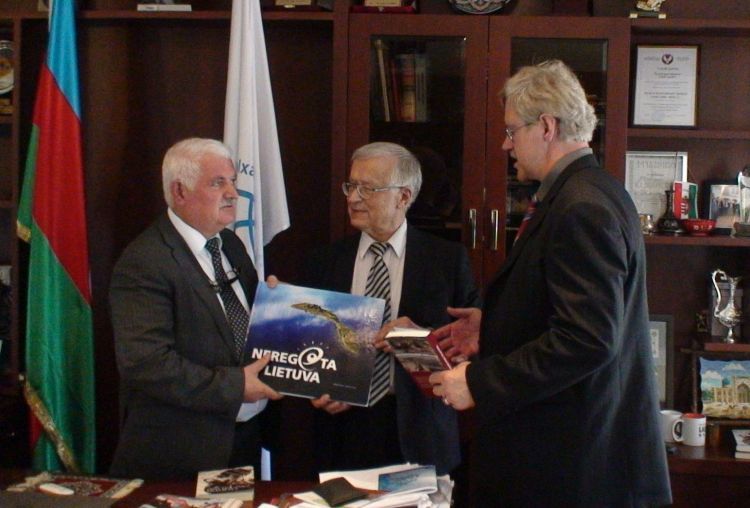 On August 13, at the age of 76, after a serious illness, the famous Lithuanian historian and scientist Algimantas Liekis passed away.
Being conscientious, hardworking and responsible, Liekis always tried to get to the bottom of the truth and indicate in his books only truthful circumstances.
The Armenia-Azerbaijan Nagorno-Karabakh conflict attracted special attention of Algimantas Liekis. Often bumping into distorted information, the historian tried to get deeper familiar with the details of the conflict and convey the truth about the Armenian aggression against the Azerbaijani people.
In 2016, a presentation of his book "The Resettlement of Peoples to the Caucasus: XX Century" was held in Lithuania. The author described the resettlement of Armenians two centuries ago to Azerbaijani territories and, in general, to the South Caucasus from Turkey and Iran. The book also reflects the facts of terrorist acts committed by the Armenian nationalists against the Azerbaijani people over the past hundred years, ethnic cleansing, massacre, as well as the occupation of Azerbaijani lands.
"The Resettlement of Peoples to the Caucasus: XX Century" is the first book written in Lithuania on the Nagorno-Karabakh conflict and aroused the interest of the scientific community. The book has been translated into Russian.
In October 2016, Algimantas Liekis and Gintaras Visotskas, editor of the Lithuanian Internet portal "slaptai.lt", took part in the V Baku International Humanitarian Forum in Baku. During that stay in Azerbaijan, they visited the office of the International Eurasia Press Fund (IEPF) and interviewed a president of the Fund Umud Mirzayev. In an interview with Algimantas Liekis, Mirzaev was asked to talk about the Karabakh conflict as an eyewitness to the terrible events of the late 80s and early 90s. The information has been translated and published in a number of sources in the Lithuanian language. Professor, Doctor of Science Algimantas Liekis is the author of 43 monographs, more than 1,400 articles, as well as the author or co-author of 79 books. A. Liekis is the editor of seven scientific books entitled “Lithuanian Science” and “Lithuanian People”. Most of his books are devoted to the history of the Lithuanian people and state.
Articles about "The Resettlement of Peoples to the Caucasus: XX Century" were published in the authoritative magazine "Literatura-menas", in 8,9 and 10 issues of the weekly newspaper "Karştas komentaras", as well as in the Internet portal "slaptai.lt".
Algimantas Liekis will forever remain in our memory as a true patriot of justice. We express our sincere condolences to the relatives and friends of A. Liekis.
Bright memory!
International Eurasia Press Fund
P.S. The former Ambassador Extraordinary and Plenipotentiary of Azerbaijan to Georgia and Moldova, Doctor of Law, Professor Namig Aliyev and official representative of the International Eurasia Press Fund Richardas Lapaitis also expressed their condolences on the death of a brilliant scientist.